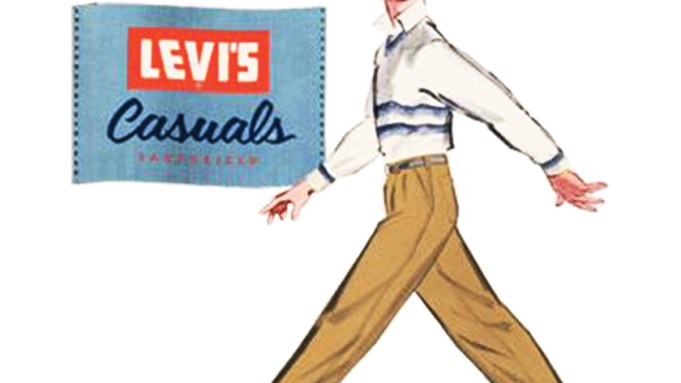 1905: Levi Strauss produces its first pants made from khaki fabric.

1913: Levi’s begins to manufacture twill pants in tan, bronze and woodsy colors. The garments are worn by office workers and those in pedestrian jobs, while its denim work pants are worn by manual laborers.

THIRTIES: A pair of Levi’s khaki trousers is unearthed in a mine.

FIFTIES: Khaki work shirts and pants are produced under the Levi’s Tab Twills label, circa 1958.

1986: The Dockers brand launches. The brand hits $1 million in wholesale volume in its first year.

1988: Wholesale volume tops $40 million as Dockers for Women, men’s shirts and children’s wear are added to the lineup.

1992: Dockers begins to market the concept of “casual Fridays” by sending out an eight-page dressing guide to 25,000 human resources departments around the country. (Levi’s itself began allowing employees to wear its pants to work in the early Eighties.)
• The brand begins marketing internationally in Canada, New Zealand, Chile, Costa Rica, Philippines, Indonesia, Hong Kong and Malaysia.

1993: A pair of vintage Levi’s dating to the Twenties is found in a garbage dump, featuring khaki pockets customized [presumably by the owner]. The style is called the “Heath.”

1994: Dockers records $1 billion in sales, and the brand is introduced in Europe.

NINETIES: A pair of vintage Levi’s khakis is found in a cave.

2009: The cross-channel “Wear the Pants” campaign bows.
• The launch of the Signature Khaki, which makes up 40 percent of sales today.

2010: Dockers collaborates on a collection with designer Steven Alan.
• The brand introduces the premium K-1 Khaki collection in the U.S.

2011: Dockers launches the Alpha Khaki with the tag line, “Where jeans end and khakis begin.” The camouflage style is the number-one bestseller at Urban Outfitters.
• Dockers holds a contest collaboration with GQ’s Best New Menswear Designers in America; Alexander Wang wins.
• The wing and anchor motif is embroidered in orange on the back of all Dockers pants.