In the Spotlight: Hiro Clark 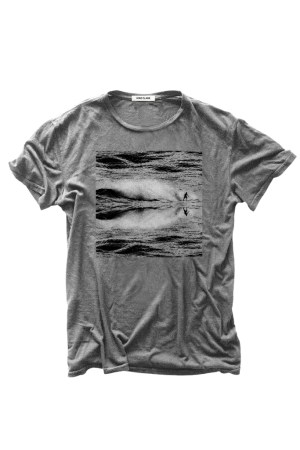 History: For many, the beach is the ultimate symbol of Los Angeles life. So after moving to California from New York in 2012, Andy Salzer began selling his line of men’s T-shirts, Hiro Clark, on its sandy shores — literally — last September. But what struck him most about L.A. were the struggles, or “dark optimism,” of the otherwise sunny city, where, he said, “People are willing to do whatever it takes to make it.” This attitude presents itself in the line’s edgy graphics.

Niche: The 100 percent cotton, classic-fit T-shirts are produced in limited runs of 12 for each design. Despite being an unofficial uniform in Los Angeles, Salzer feels there is something missing in the men’s category, and he hopes to make his mark in T-shirts before expanding into other areas.

Key Products: Hiro Clark collaborated with artist Michael Bevilacqua and photographer John Arsenault to produce the graphic T-shirts. A more unexpected collaboration is Hiro Clark x Le Labo, a line of scented T-shirts based on the idea of lovers stealing each others’ T-shirts and perfume.

Major Moment: Hiro Clark T-shirts will move from online into brick-and-mortar in July, but Salzer remains mum on which stores will carry the line.