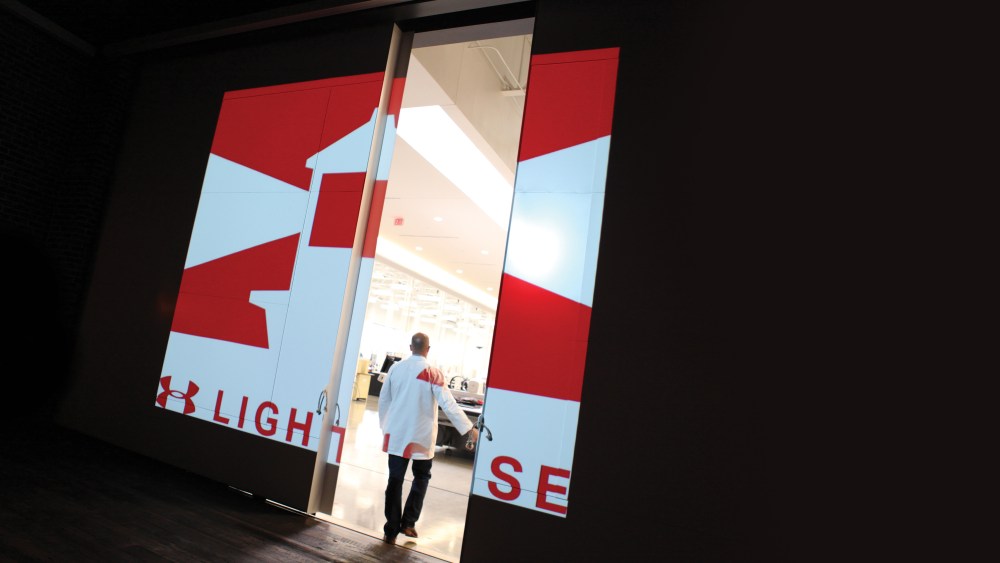 When Michael Phelps stepped out onto the pool deck on his way to his 19th career gold medal in his fifth Olympics Games, he wore warm-ups and a pair of Under Armour training sneakers. The choice of footwear was no great surprise since the swimmer is sponsored by the activewear brand. But the red, white and blue UA Architech shoes with their bright lattice midsole, were nearly as newsworthy as his unending quest for gold — they are among the first created by a 3-D printer.

The Architech is just one of the products produced in Under Armour‘s UA Lighthouse, a center for design and innovation that opened in South Baltimore at the end of June.

The project includes plans to build a new Under Armour campus, a whiskey distillery called Sagamore Spirit Distillery, offices, homes, stores and restaurants enhanced by parks and running trails. While the larger project is still down the road, a portion is already up and running in a former bus depot called City Garage.

That’s where UA Lighthouse is located, next to The Foundery, a subscription-based service where entrepreneurs can curate and develop product, as well as Main Street, an incubator space for start-ups. All told, City Garage is being referred to as “a maker’s culture.”

Plank said that as the brand celebrates its 20th anniversary, it is more committed than ever “to driving global innovation and continuing to expand our global headquarters in our great hometown of Baltimore, Maryland, USA. The UA Lighthouse will serve as a beacon to make product better, faster and more efficiently, ultimately solving real problems for athletes and making them better around the world.” While he has publicly acknowledged that most of the company’s product is made overseas, the opening of the Lighthouse is the company’s first highly visible step to reverse that process.

Plank and Under Armour’s commitment to both Baltimore and the entrepreneurial spirit is well-documented. The University of Maryland alumnus created the compression shirt, which would spawn a $4 billion-plus company, in the basement of his grandmother’s home 20 years ago, and its mission remains the same today: to make athletes better.

Achieving that goal revolves around creating products with enhanced attributes and bringing them to market faster than its competitors, namely Nike and Adidas, the latter of which Under Armour recently eclipsed for the number-two position in the U.S. sportswear market.

In true Under Armour fashion, a visit to the complex begins with a Disneyland-like experience. Guests are greeted at the door by tour guides in crisp white lab coats. The door to the outside closes, and a video starts to play.

It explains that the new facility is an extension of the company’s innovation center, which is focused on creating cutting-edge product. The Lighthouse augments that process by serving as an incubator for innovative manufacturing processes that the company can apply to its footwear and apparel.

“The process of building footwear and apparel is not much different than it was 100 years ago,” said Adam Bayer, director of the Lighthouse plant. But building better product faster and more cost-effectively is the “secret weapon” that can help Under Armour continue its winning ways, the company believes.

At the conclusion of the video, guests are invited in to see the facility, which UA said is “laying the groundwork for the factory of the future.”

The brightly lit space is filled with state-of-the-art machinery from around the world that the company hopes will transform the production process. Among the partners in the space are Dow Chemical Co., Huntsman, Lectra, Bemis, Epson, Desma, 3dMD and others.

Under Armour has invested in hiring a highly experienced staff that is unafraid to test and experiment with the expensive equipment to see exactly how far they can push the envelope.

A knitting specialist working on the latest Stoll machine from Germany can barely contain his enthusiasm. “This is the most advanced knitting machine on the planet,” he gushed. Its flat-knitting technology allows the brand to create footwear and apparel with unique properties and designs not currently available in the market. For example, the machine uses one feeder rather than four to plait the yarn in such a way that one color can be used for one side of the garment and another on the reverse. It also allows the company to create an entire garment or shoe in one piece, eliminating the need for — and excess waste of — stitching together separate pieces.

Similar innovations were showcased in Italy’s Robot System Automation machines for footwear. The machine automates the cleaning, priming and cementing of the uppers and midsoles of shoes, replacing the 70 humans that would otherwise use toothbrushes to paint on cement during an eight-hour shift to accomplish the same task.

Across the way, the Desma machine from Germany injects polyurethane into the cavity of shoes to attach the midsole to the upper in an alternate production method traditionally used only in outdoor and tactical boots. Using polyurethane rather than cement allows Under Armour to create a lighter shoe for running.

In the apparel section, the Lighthouse offers a sew-free area with ultrasonic cutters and seam-taping technology that it will use for everything from sports bras to outerwear.

Once perfected, the product can move from concept to market in less than three months, which is a more accelerated time frame than much of the competition, Under Armour said.

“This is our sandbox,” Bayer said. “Things may or may not have validity, but we’re creating a blueprint.”

There are body scanners where 54 cameras shoot seven frames a second to create an avatar in both still form and in motion. This allows the company to design product specifically for its marquee athletes — who, in addition to Phelps, include Stephen Curry, Jordan Spieth and Misty Copeland. The company is also using the technology, which was perfected in the medical field by 3dMD, in Atlanta, with groups of athletes — an entire college football team or golf squad — and it will utilize the data gathered to improve the fit of its commercial product.

The one proprietary area in which the company did not allow photography was the 3-D printing department where Phelps’ Architech sneakers — complete with a tiny footprint of his infant son Boomer on the inside — were created. The process, which took 18 months to perfect, includes heating, shaping and solidifying a powder that can then be molded and printed into an interlaced lattice midsole that provides a stable heel structure as well as cushioning.

By producing these shoes, which actually hit the consumer market in a limited way in March and sold out immediately despite their $300 price tag, Under Armour beat its rivals to the punch.

“It was a space race, and we won,” said Kevin Haley, president of product and innovation for Under Armour.

Speaking to the Lighthouse as a whole, Haley said, “We’re at an inflection point where we’re big enough to have the resources to invest, but we’re still small enough to move quickly. We’re not looking at a $30 billion supply chain, which can be a disadvantage.”

He acknowledged that competitors — Under Armour employees never refer to its rival Nike by name — also have innovation centers of their own, but theirs is different. “Our competitors have invested for many more years,” Haley said, “but we’ll grow and learn. Our focus is not on being bigger but being better.”

Its innovation staff “scours the globe for the best technology available,” or coming down the pike, he said, and works to secure it for Under Armour. So whether that’s a Fortune 500 company such as Dow Chemical, a venture-capital-based firm or an inventor working out of his garage, the company is open to teaming up with any and all of them.

Most of these partnerships carry no contractual obligation, Haley said, but are “mutually beneficial” to both parties. Sometimes, exclusivity on certain technology is secured by Under Armour for specific product categories or lengths of time.

For years, Under Armour has been “maniacally open” to ferreting out the best emerging technology and even has a portal on its web site to solicit ideas from the outside. “Everyone gets a response,” Haley said. “Sometimes we even get thank-you letters for our rejection letters because at least someone took the time to look at their idea.”

Speed to market is also key to the success of the Lighthouse.

The supply chain for the apparel and footwear industry “is set up to chase low-cost product around the globe,” Haley said. While this strategy still works for many brands, it’s a business model that “doesn’t make sense” in today’s supercharged world. “You make something across the ocean, put it in a box and ship it on a boat. But you don’t get the [sales], because it’s sitting on a boat or in a container,” he said.

The technology perfected at the Lighthouse aims to upend that process.

“In this center, we will establish new industry standards for design and manufacturing that will elevate our shared supply chain partners worldwide and lead the advancement of product across our company,” Haley said.