The capsule will first launch on the app, followed by Selfridges and pop-ups in the U.S.

LOS ANGELES — Kappa’s revving up the engine on its partnership with the Gumball 3000 annual exotic car tour.

The Italian sportswear company is launching a capsule collection with Gumball 3000, a London-based experiences company that produces a car tour of the same name. The 15-piece capsule includes a tracksuit, soccer shirt and short sets, swim trunks, basketball jersey, hats, bags and slides, reflecting an expanded offering from last year’s collaboration between the two. There’s also a reworked Kappa-Gumball logo unique to the collection.

Kappa and Gumball 3000 also worked with Carrera to bring into the mix two sunglass styles, the Glory and HyperFit.

The capsule debuts May 29 on Ntwrk, the hybrid retail and entertainment platform started by Agenda founder Aaron Levant last year and backed by Warner Bros. Digital Networks and MSA Enterprises.

“Really, I just love what Ntwrk is doing. I’ve known Aaron Levant a very long time,” said Kappa USA president Dre Hayes. “It’s exciting because Ntwrk is really about things that have energy and this definitely has energy. It’s global. It’s exciting. I love the idea of shopping through an app and just something that lives for only 10 minutes and then it’s gone.”

Hayes said the Gumball 3000 capsule is the first of several projects Kappa plans to do with Ntwrk. 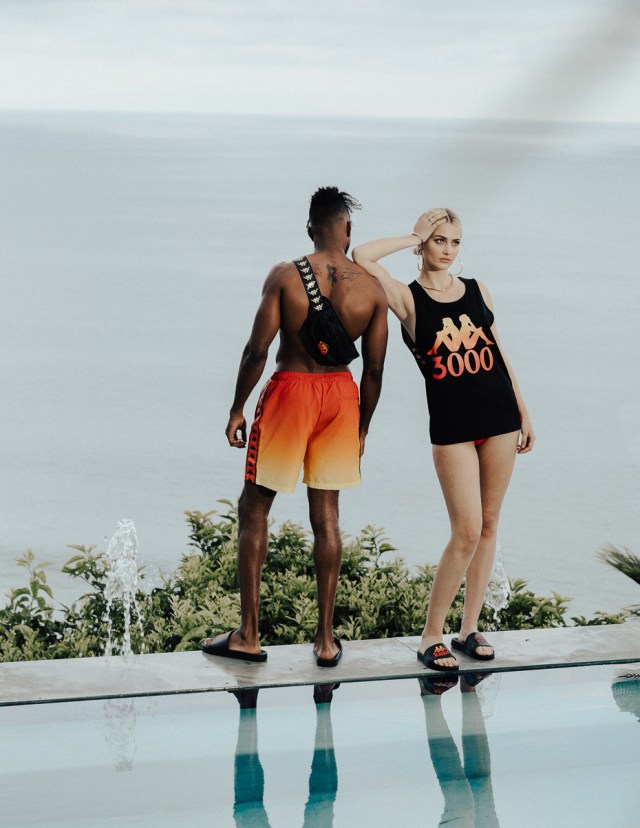 The platform has so far seen traction with a good number of brands. Levant estimated there have been more than 30 projects Ntwrk’s done with companies since its fall launch.

Ntwrk, at its simplest, pitches itself as a tool for brands to get in front of consumers using highly produced video content to promote their brands and sell product. It’s been likened to a modernized version of HSN or QVC for Generation Z. The Kappa deal very much reflects what Levant set out to do with Ntwrk, the serial entrepreneur said.

“We’re excited to work with Kappa,” Levant said. “This type of project is the exact epitome of Ntwrk.…We involve the cross of collaboration between different types of companies. Here, you’ve got a heritage soccer brand from Europe collaborating with ultimately what is an experiential company. This is the type of project that really lends itself to Ntwrk.”

The Kappa x Gumball 3000 capsule, after debuting on the app, will go on to launch at a three-week pop-in at Selfridges and then later roll out to the Kappa U.S. web store June 7. Hayes said there is a commitment to also do an activation in the U.S., potentially pop-ups in New York and Los Angeles, but those details have yet to be confirmed.

From there, it’ll be on to next year with Kappa and Gumball 3000 already linked for that rally, which will see it swing to North American, traveling from Toronto to Havana.

Hayes already can’t wait for next year, with the route so close to home: “For me I’m really excited about being able to do some large activations in North America for next year’s rally.”