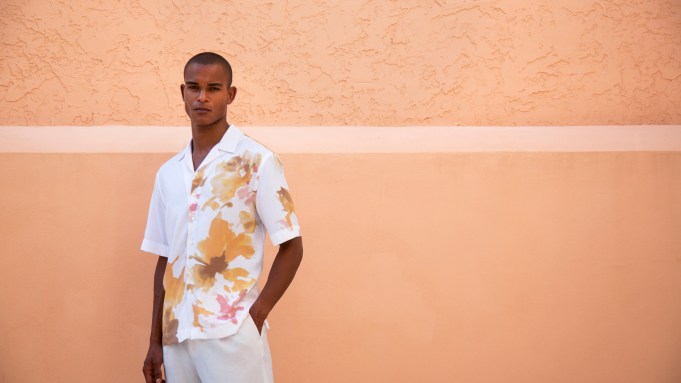 It didn’t take Anthony Keegan long to make his mark at Bugatchi.

The designer joined the men’s essentials brand in April in the new role of creative director and his first collection was introduced last week during men’s market week in New York.

The Montreal-based Bugatchi is best known for its eight-way stretch shirts that offer performance attributes with the comfort of cotton.

Although the shirt remains the core of the brand and is offered in a wide range of colors and patterns, it’s hardly alone. The company also has a large assortment of sophisticated and colorful sportswear and swimwear with a top-end range that Keegan referred to as “elevated essentials — that’s the homing beacon of the brand. We’re going to the space where we should have been all along,” he said.

The collection, which is made in Italy and Portugal, is intended to evoke a “joie de vivre,” he said, and deliver a message of “easy elegance.” That was obvious in the array of long- and short-sleeve shirts in tropical prints, “late ‘80s Armani-inspired” oversize pants, high-end crocheted sweaters, summer suede jackets and a range of colorful digital prints on swimwear offered in two lengths.

Although the brand doesn’t do strict tailoring, Keegan created some more dressy options that were easy and comfortable such as a work shirt in a two-button blazer silhouette and a packable trench.

Keegan said the collection is broken down into three segments: Radiant, for the ready-to-wear, Revive for the swim and resortwear, and Restore for the travel and comfortable offering. The idea, he said, was to “create silos and tell stories” that will “make noise and attract new customers.”

Bugatchi has a lot of stories to tell, he believes. It was founded in Montreal in 1981 by Cecile Revah, chief executive officer, and her brother Daniel Revah. It is known for its bright colors, prints and craftsmanship and was an early proponent of collaborations with the launch of the Bugatchi Uomo for Michael Jordan collection in 1991.

Keegan, too, has a rich history he can mine for stories. A native of Toronto, he is a graduate of the fashion design program at London’s Central Saint Martins and worked at Giorgio Armani, Versace and Kenneth Cole over the course of his 25-year career. He founded Commonwealth Utilities, a contemporary luxury men’s brand in 2006, was creative director of women’s, men’s and accessories for DKNY and also served as head of design for Canada Goose.

In addition to its own website, the Bugatchi brand is sold at top retailers in the U.S. and Canada including Nordstrom, Neiman Marcus, Saks Fifth Avenue and Harry Rosen.