Kevin Hart Chats Fabletics Men, Being Home During the Pandemic

The entertainer is an investor and the face of the activewear brand.

“What have I been wearing since I’ve been home?” asked Kevin Hart over the phone. Like most of the country, he’s in quarantine due to the coronavirus pandemic. “Well, this is going to kill you, because my mornings start off the same with my light workouts, and it’s dripped in Fabletics.”

No surprise there. The reason for the call, after all, was to discuss Fabletics Men, Hart’s newest endeavor launching on April 22. The charismatic entertainer, a stand-up comedian, actor and producer, is an investor and a face of the activewear brand.

“Outside of that, I’m in pajama pants,” he added with his familiar laugh. “I don’t think I’ve been dressed one day.”

As a lover of health and wellness, he said, he’s been staying active using his at-home gym, but the majority of his time is spent with his family: “I’m talking from lunch to dinner, movies together, board games. And you know, just doing it all from the perspective of comfort, so for me, a large portion of that takes place in my Fabletics, and other than that, it’s pajama pants that have probably been washed about 75 times. They’ve gotten to a good place of comfort that I intend to hold on to.”

Launched in 2013 by TechStyle Fashion Group — headed by chief executive officers and founders Don Ressler and Adam Goldenberg — Fabletics is a “flexible membership” retailer with more than 1.5 million members and 40 brick-and-mortar stores nationwide. (Members, who pay monthly, have advantages like receiving discounted prices, starting at $49.95 for a complete outfit.) After finding success with its women’s line, making $400 million in annual revenue, the company is turning its attention toward men’s.

“When you look at their women’s, you’re getting great looks, designs, colors and fabrics that are associated with quality, but we’re giving it to you at a different price point than most,” said Hart. “We want to match that same energy for men. You already have a blueprint set up. You’ve already found what the world needed and why they would love it, which you now have the answers to. It’s duplicating that and finding new success.…I only attach myself to things that I believe in.”

The line — featuring breathable T-shirts, tanks, shorts, pants, hoodies and crew sweatshirts — will be available at fabletics.com and inside all store locations when retail reopens. Consumers are invited to put themselves on a waitlist to get an early look at the collection using the code “KevinHeart.” And on April 21, Hart himself will share a link on social media for his fans to access it a day before its official release. From then through the end of May, 20 percent of Fabletics Men’s net proceeds will go toward Heart to Heart International, an organization that works to improve health access, humanitarian development and crisis relief worldwide. The company is pledging $50,000 toward the cause. 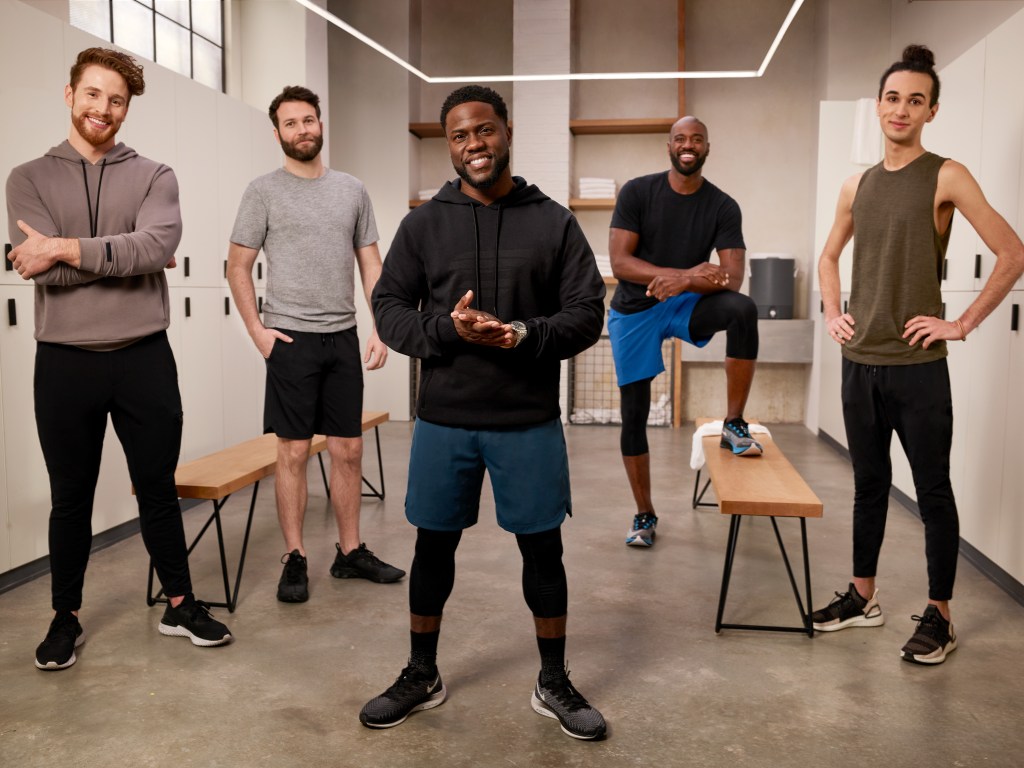 Hart said he hoped the release would bring quality and comfort at a reasonable price during the pandemic.

“I’ve been attached to products that were a little pricy, that weren’t necessarily affordable,” he shared. “When you get to looking at the world and see the majority within the world, there should be a focus, a high level of attention on affordable clothing, affordable activewear.…We’re launching in a climate where one thing is certain. We’re all in our homes. We’re all sitting down at the moment. And, you know, when you sit down, you can get beat down. You can get beat down by just feeling like, ‘What does tomorrow hold? What can I do? How can I even work on myself?’ Well, I’m home, and I’m going to make sure that my attitude stays on a high level. I want to put that positivity out into the world.”

Born and raised in Philadelphia, his optimistic outlook stems from his upbringing, he shared: “I’ve had nothing. You know what it’s like to not have nothing? When you’ve seen rock bottom and experienced rock bottom, what do you have to not be thankful for? I’ve seen the worst of the worst, and when I was in the worst of the worst, I was positive then. My mom did the best that she could to make sure we had the things that we needed, and I feel like she did an amazing job. She did a good job of making me a happy individual, a happy, personable man and a guy that loves to love.”

What makes him smile these days? “Ultimately, it’s being able to be with my wife, my kids, spend time with them that I haven’t been able to in my past because of my schedule,” he said. “This is a moment where I’m embracing that.

“Also, looking at the world and watching so many people step up in the space of health, seeing people give in a time where we have so many in need, that makes me smile,” he added. “It makes me smile seeing that there’s positivity that’s coming out of this negativity.”

Before the end of the call, he had one last message: “Brace yourself. You’re going to see a lot of men with an F on their chest, and it’s going to mean something.”