A hoodie from the Uninterrupted apparel line.

Uninterrupted, the athlete empowerment platform by LeBron James and Maverick Carter, will connect athletes to consumers through fashion this month, with the launch of Uninterrupted apparel and e-commerce on Oct. 7. The collection will include shorts, hats, socks and hoodies, retailing between $14 and $100, and feature Nike branding and Uninterrupted’s signature phrase “I am more than an athlete.”

“The launch of this collection and store is an opportunity for us to align our content and our product, both of which are meant to empower people and to build an emotional connection,” Carter said. “Everything we create and put out in the world has to be authentic and have some meaning, both for us and for our consumers, and by getting that part right, we can deliver more than just a product.”

The brand also collaborated with Nike on a special More Than an Athlete Air Force 1 sneaker, which they teased on social media in September. The $130 low top has a white leather upper with off-white heel, ankle and swoosh, royal blue laces and outsole and phrases “I Am Uninterrupted” on tape above the midsole and “I Am More Than” on the ankle. The pair will launch on the Uninterrupted e-commerce site on Oct. 7 and globally on Oct. 10.

Carter added, “Whether it’s a film, a television show, an event or a pair of shoes, everything Uninterrupted does comes back to the fundamental belief that every human is multidimensional and should be empowered to share their own story.” 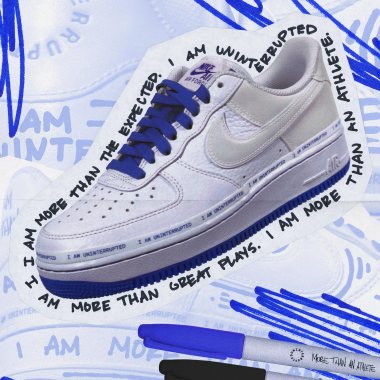 James is an entrepreneur just as much as he is a professional athlete, starting the agent and sports-marketing company LRMR with childhood friends Carter, Rich Paul and Randy Mims, cofounding Unknwn in Miami (which is opening a second physical location this year), acquiring a partial stake in Premier League’s Liverpool FC and cofounding production company SpringHill Entertainment, among other projects.

Uninterrupted was created to empower athletes and challenge sports media by partnering with athletes to tell unique, human stories from their personal viewpoints. “Our mission as a company is to empower everyone to be ‘More Than,’” Carter said.

In early September, Uninterrupted launched its “Glass Helmet Project with NFL athletes Saquon Barkley, Benny Snell Jr., Hakeem Butler and Damian Harris, among others. The 3-D printed American football helmet by Victor Solomon and James was designed to highlight the players that wear the helmets on game day. The message was part of the brand’s “They Will Be Seen” campaign.

“Athletes love what we do, and by empowering them to share their stories from their authentic point of view, we empower consumers around the globe to understand them better and to connect with them in a whole new way. It’s something that the audience loves to see from the athlete, but now something that they have come to see in themselves and connect with: the recognition that we are all ‘More Than,’” Carter said.