Babylon has just capped two Japan pop-ups and is now off to Paris before swinging back to downtown L.A. for a large-scale activation.

Babylon's Lee Spielman (right) at the shoot for the brand's spring video.

LOS ANGELES — “This kid skates like he’s being chased,” Babylon’s Lee Spielman said, looking at the video playing on his iPhone.

Spielman, who started the brand Babylon with Garrett Stevenson in 2015, is just barely getting over jet lag from back-to-back pop-ups in Osaka, Japan, and Tokyo that included now sold-out collaborations with Japanese brands Wasted Youth, Bounty Hunter, Neighborhood, ReadymMade and the artist Kosuke Kawamura.

The shops were aimed at building buzz around the release of Babylon’s spring collection, which continues to expand and diversify with each season. It’s a glimpse into how the overall brand is maturing, while staying true to its core skater. Spring was accompanied with a video that went viral and won a nod from Virgil Abloh and many others for its cinematic quality. Some 20 skaters, artists and DJs, all friends of the brand, are featured in the 58-second clip that slowly pans across each person staged on a dirt path in East Los Angeles before what appears to be a burning palm tree is revealed in the final frames.

“We’re just trying to keep elevating what we can do. For us, that was a full production. It was the first time we had a big enough collection to where every single kid was wearing Babylon top to bottom,” Spielman said. “The one thing with the video is it makes it look less dated. You could look at that in 20 years and it would still be tight, clothing aside, Babylon aside.”

But clothing at the forefront, Babylon is quietly evolving on its own terms. While spring is the largest in terms of stockkeeping-unit count, Stevenson, who is based out of Australia and designed the bulk of this collection, continues to push himself beyond graphic T-shirts. That includes a double flannel construction button-up, a waterproof jacket that looks like flannel from afar but snakeskin up close, and a quilted jacket reminiscent of the military liners both he and Spielman like to wear.

Pushing that envelope is helping add new customers to Babylon; they are a bit older with more discretionary income.

“T-shirts are forever going to be cool. I’d be lying if I said I didn’t have over 1,000 T-shirts and I can’t get rid of them. I have T-shirts from when I was 16 years old from seeing my favorite band or special times in my life. But I think us making smarter and more unique clothes definitely draws in an older customer, which is cool. Definitely I’m seeing with accounts we sell to, they want more cut-and-sew from us.”

Spielman and Stevenson are still on the hunt for their next store and community space. They closed their first one — a 4,000-square-foot home in Hollywood with a skate bowl in the backyard — last year and hope to have a new place locked in by the end of this year. They’re in no rush, Spielman said. That’s because each month for the rest of this year, Babylon is throwing activations.

Next up is Paris, where the label has a showroom. After surveying the landscape at this past Paris Fashion Week, Spielman felt he got a good enough grip on the scene there, with Babylon set to host a party at David Lynch’s private club, Silencio.

“We went to feel it out,” Spielman said of his last trip to Paris Fashion Week. “We did a party with [French DJ Louis] Brodinski at a club and did a mix tape with him and a T-shirt release. I just realized on that last trip, it’s less about trying to sell to kids. Yeah, buyers are going to come to the showroom. But, for us, it’s how can we bring the Babylon vibe to the city? Showroom aside, it’s one big meetup of a ton of creatives from all over the world so you cross paths with people you don’t always cross paths with. It wasn’t just Prada, Burberry, Louis Vuitton, Hermès. It was creatives in the city making stuff happen.”

After Paris is an activation taking over a portion of downtown Los Angeles. Spielman is mum on the details of the company Babylon is working with, but he described it as “insane” and something that will be open to the public. There’s also a collaboration with a large brand also set for release this year.

Maybe most important of all the projects currently on Babylon’s plate is a skate video Spielman wants to lock down, a montage of all the video clips he’s stored away on his iPhone. There are too many to count. That’s really where Babylon started and it’s where much of the respect from the brand’s core following is derived from: kids just skateboarding.

“These clips are super important to me,” Spielman said. “I think about it from an outsider’s perspective. I’m in the middle of Nebraska, Japan, Italy, wherever. You see a kid [in a video] smashing through downtown L.A. with blue skies, palm trees, it’s sunny and he’s power sliding, straight speed demon stuff. It’s like what a friend of ours once said about music. Those videos to me are like a Polaroid. It’s a snapshot of that kid at that current moment. It will never be like that again. For us, it’s a visual documentation of now.” 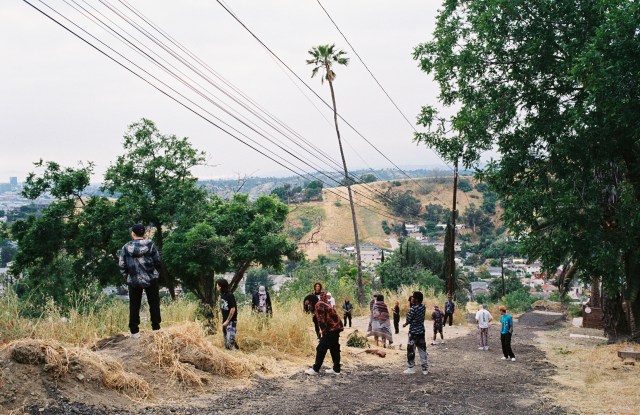 Behind the scenes of Babylon’s spring collection video shoot.