Bristol Studio Comes Into Its Own

The elevated men’s brand, centered around basketball culture, is forging a path for itself following some retooling of the business.

Bristol Studio founder and designer Luke Tadashi pictured at the El Monte factory that makes most of the company's garments.

It does, but before he can get what sounds to be a qualifier in, the El Monte factory owner whose facility — where one might also see samples laying around from Vetements, Carbon38 or Soul Cycle — he’s standing beside cuts in. “It’s not simple. He’s lying,” she said playfully. She would know. Nearly everything Tadashi’s thrown at this factory has been far from typical, from the 25-oz. fabric so thick a hammer has to be used just to set the zipper, to the upward of 13 panel pieces for sweats (it’s normally seven, or four on cheaper versions).

“Nothing that we do is standard, Nothing we’re doing is based on existing fits. It has to be something from scratch,” Tadashi later said, while pulling a reversible hoodie over his head to model its fit from the factory floor. About a year-and-a-half ago, the brand stopped hiring fit models given Tadashi’s exacting standards for his label’s fits and proportions.

Today, Bristol Studio may perhaps be coming into its own. Aside from putting a halt on fit models, roughly a year ago Tadashi parted ways with the brand’s other cofounder, Tommy Nowels. The team now includes Jake Fenster, who handles marketing and operations, and Maasai Ephriam, who now heads public relations and social media. All three met through basketball.

The company also transitioned to a direct-to-consumer model, looks to forge new paths in performance sportswear, reintroduce denim for fall and continues to amp up work with partners such as LeBron James and Adidas (for which he collaborated on the Crazy BYW shoe and apparel in the past and most recently designed the jerseys worn during the activewear company’s three-point shoot-out during the Coachella Valley Music and Arts Festival). 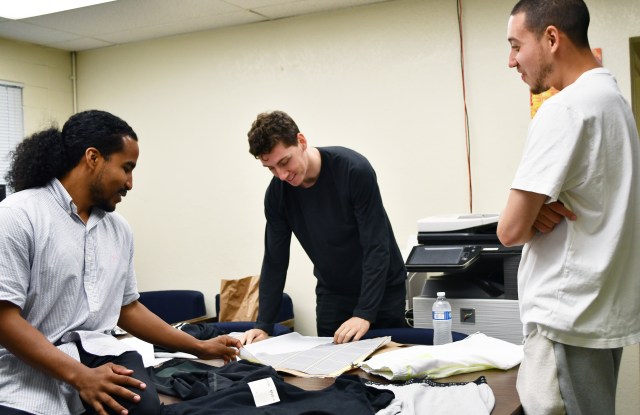 From left: Maasai Ephriam, Jake Fenster and Luke Tadashi inside the El Monte factory that produces most of the Bristol Studio line.  Kari Hamanaka

The strides serve as the next path forward for Bristol, which began as a college project exploring basketball culture through the lens of a contemporary men’s brand, defined by the details (heavyweight French terries, flatlock stitching that molds a garment to the organic shape of the human body and reversible hoodies and sweatpants). It’s an attention to detail that Tadashi absorbed from his grandmother.

“I think sometimes a lot of what gets lost about our brand is, yes, we’re centered around basketball and so to some people it seems minimal and it’s not as meaningful,” Tadashi said. “People say ‘Oh, cool, basketball. But why?’ For me, growing up as a kid, some of my earliest memories are connected to basketball. This simple act of putting a ball through a hoop gave me such comfort that this informed my life going forward, and it was the place that I found peace and comfort amidst whatever chaos was happening in my life.”

Further clarifying the message of what a basketball culture-inspired men’s line means and looks like will be the challenge for the brand. Bristol will have to continue to work to relay this to a broader market that has collectively lumped most brands selling T-shirts, sweats and the like into streetwear. Bristol, with its carefully crafted, dressed-up sportswear, doesn’t seem to fit the bill there.

“I don’t dislike the [streetwear] label, but I think it becomes so broad,” Tadashi said. “There’s aspects of our brand that are definitely streetwear, but the term is so nebulous, I don’t even know exactly what it means. Today streetwear is so much about blurring these lines between high and low sport formal and so, in that sense, I consider us streetwear. On the other hand, I think our connection to basketball makes us not streetwear. I’m trying to explore that culture around basketball in a way that hasn’t yet been interpreted and that’s much more niche and it’s a little bit more elevated. It’s also abstract and a little bit avant garde.”

That abstraction was perhaps a challenge for some buyers to wrap their heads around. When Bristol Studio did have a wholesale business, Tadashi said the orders seemed more like test buys and didn’t reflect the full breadth of the brand, a common concern among many lines that have also chosen direct-to-consumer as their path forward. Some buyers seemed more interested in surefire guarantees, with one particular retailer about a year ago perhaps serving as the final push to change up the business model. 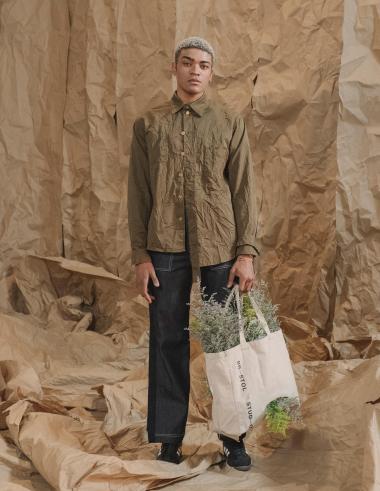 Tadashi at the time had designed a whole collection around an autobiography he had found, written by his grandfather, a Japanese immigrant, for his family that touched on key points in history, such as World War II.

“I was so moved by the book and I found so many answers that I was looking for just as a person coming of age,” he said. “It transcended a time and place, so I decided to base this collection around that. It was more wovens than knits and more fashion contemporary than sportswear, and I remember telling this story to a buyer and him being like, ‘Oh, that’s cool. That’s cool,’ but then he said, ‘How many followers do you have?’ I had poured my heart and soul into this and fashion design, to me, I don’t mean to sound snobby, but this is how I work through self-exploration and my thoughts of who I am. All these things. It’s really channeled through design and so, to have done that and be received in that way, I decided we’re not doing this anymore.”

That retailer, he declined to say who, ended up wanting to place an order but Bristol Studios had already moved forward with the conversion to direct. Tadashi said he wouldn’t rule out working with retailers again, but it would have to make sense from a marketing standpoint, something the company is also adept at on its own.

The past few months, the company soft-launched a concept called The Bristol Run, a group of friends of the brand playing basketball in Venice. The game has drawn an interesting mix of musicians, artists and photographers connecting over the sport. Marketing professionals would call this organic and authentic marketing. But this is just Tadashi and friends hanging out over a sport he’s trying to scale a fashion brand on.

“We do have a lot of friends in different industries and we like to create a place where they can all come and just connect,” said Ephriam. “We’ve seen people actually develop partnerships from our meetings at our runs and develop friendships. That’s what brought us together in life with basketball so we’re basically just emulating that in a bigger way through these runs. It’s not meant to be some huge spectacle.” 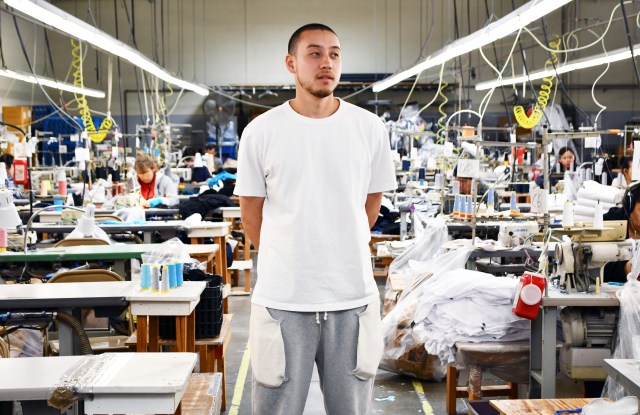 Tadashi pointed out the longer-term vision would be to create a youth-competitive basketball team where kids could participate for free, but also connect with a platform of creatives who could lend career guidance, culled by Bristol.

“The game provided so much opportunity for me. I grew up in Santa Monica, which is a very sheltered, wealthy bubble almost,” Tadashi said. “My way of experiencing the world and connecting with other people and just opening my point of view was through basketball.”

It’s a different perspective fueling Bristol and something so intensely personal one wonders if because it is so near and dear to Tadashi, that could hold the brand back from true scale. It’s a balance, the designer said.

“Not going to lie,” he said, “there’s times where we do see something and we think ‘OK, if we did that, even in our way, it would do really well.’ That’s an internal debate we have, but for me this is a personal story through design and there’s no way we can do that. So I’m pretty acutely aware of how it affects the business side of things. But, knock on wood, we are fortunate enough to where we’ve been successful enough up to this point.”