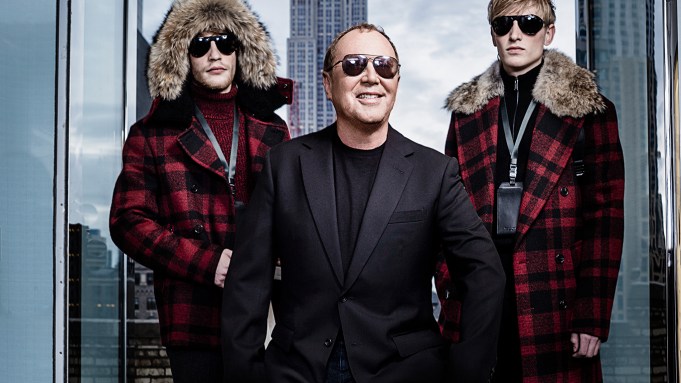 “We teased with men’s at my very first runway show in the fall of 1984,” the designer told WWD during a preview of his fall line on Monday afternoon at his Midtown office.

“We had a few guys in the show and Barbra Streisand bought all the men’s pieces for herself at Maxfield’s in Los Angeles,” he said with a hearty laugh.

That was followed by the “insane bodysuit moment in the Nineties,” Kors recalled with a shake of his head. “In my youth, I thought I was being practical — that it helped guys keep their shirts tucked in. But no man should wear a bodysuit.”

As he marks 35 years in the business, Kors has taken those lessons to heart. The collection the designer will show today is much more practical. It’s  intended to take a man “from the city to the slopes,” he said. “Leaving L.A. and going to Aspen.”

The collection is centered around outerwear — “If you’re an urban man, outerwear is your calling card,” he said — but the definition of that key piece is fluid.

“Is it a peacoat or an anorak?” Kors asked, pointing to a buffalo plaid jacket with a fur hood. A longer version along the same lines was designed to be “half-Chesterfield, half-bathrobe.”

The coats were paired with two-way stretch flannel pants and cashmere track sweats. And the looks were accessorized with a leather pouch that hung around the neck. “I’m sick of everybody losing their phones,” Kors said.

The collection includes “much more streamlined backpacks,” he said, that work as well in the great outdoors as in the city.

Accessories, a calling card for the designer, is also a key category in men’s.

“The day of the one ugly bag is gone,” he said. “Guys today know the right accessory sets him apart and makes him relevant and modern.”

Kors is targeting his collection to a guy who follows no rules.

“He has no time of day and no season,” he said, noting that the looks should appeal to men of all ages and walks of life.

“I’m not necessarily designing for me as a person,” he said. “But as busy as I am, I’m constantly packing and unpacking, changing time zones and climates.”

So the line’s high-performance, waterproof and breathable suit, its Wall Street utility wind pant and the cashmere interlock shirt that can take the place of a traditional T-shirt all speak to this globe-trotting gentleman.

Ditto for the mohair-blend cardigan and the curly Spanish shearling coat that can be layered in colder climates or worn alone in more-temperate regions.

This lack of rules is very freeing to Kors.

“This is a great time to design men’s wear,” he said. “Guys in their 20s are sophisticated and guys in their 50s want to look modern.”

He singled out actor Dennis Quaid who he said is the “new 60 — he doesn’t dress like a kid, but he’s sophisticated and youthful.

“Men were very stratified before,” he said. “But the rules are gone. Once we said you can be polished on the weekends and more modern at work, it changed everything.”