The MSX line will hit 500 stores on Saturday. 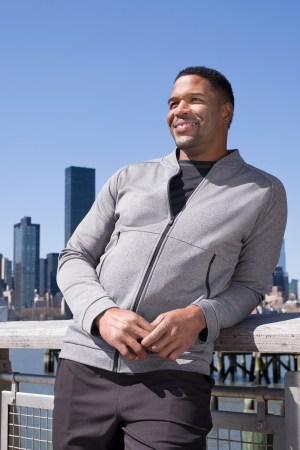 Michael Strahan is more than just a suit — even though he’s photographed publicly most often in tailored clothing.

But the former New York Giant has a more diverse life and he’s servicing his more casual side with a new collection of ath-leisurewear. The MSX by Michael Strahan collection of T-shirts, polos, joggers and chinos will hit 500 J.C. Penney stores and online on Saturday and will complement his tailored clothing collection that was introduced by the retailer last year.

During a launch event in New York Wednesday night, Strahan joined models sporting the line to introduce the new looks to editors.

“I look at my life, that’s how I judge everything,” he told WWD, adding, “I have everything from a tailored side to a more casual and comfortable side.”

He said it’s been “a quick year” since the clothing was introduced and he is “honored and humbled” by the reaction. When the suit separates, furnishings and accessories launched, they were in 215 doors, but have now rolled out to 500.

“It’s been exceeding our initial expectations,” said James Starke, senior vice president and general merchandise manager of men’s wear for Penney’s. “It has mass appeal, both for the man shopping for himself and the woman shopping for the significant other in her life.”

It is also drawing a new customer to the store, he said. “The Michael Strahan customer spends more and the collection allows us to sell a more-elevated look. Historically, we didn’t sell pinstripe suits or striped dress shirts.”

The suit collection is the top end of the offering at Penney’s, retailing for around $200. The stores’ private brands Stafford and JF retail for $150 and $140, respectively.

The extension into ath-leisure speaks not only to Strahan’s busy life, but the Penney’s customers’ as well. “Michael said he can wear up to three suits a day, but in between he’s just running,” Starke said. “And the general population is busy too, so activewear is a logical extension.”

Starke said it will be merchandised in the activewear department and will sit between Nike and the private brand Xersion. It will be housed in 300 to 500 square feet with custom mannequins, fixtures and visual presentation, he said.

The product has performance features such as locking zippers and no-chafe seams and key silhouettes include T-shirts, short-sleeve crews, layering pieces and a bomber jacket. Prices range from $12 for a tee to under $50 for the jacket.

Beyond this, Starke said Penney’s is working on a shoe line with Strahan and is also “open to other categories” down the road. “His support of the line has been amazing.”

Strahan said he refers to the ath-leisure line as “every wear for everywhere. I just want to be comfortable and this line is perfect for that. But I’m not done in apparel, there’s a lot more I can do. We’re working on shoes and then there’s denim, kids’, women’s — there are so many ways we can go.”