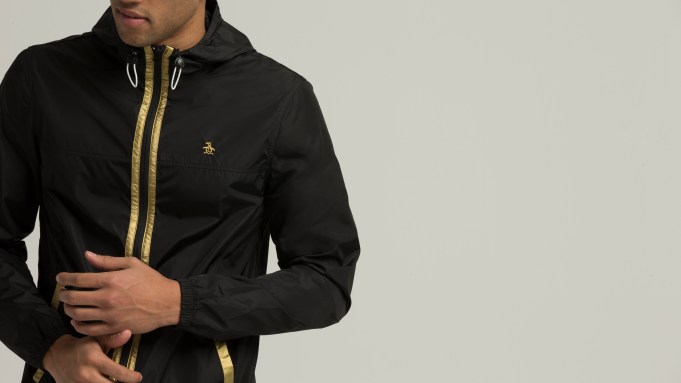 That’s the moniker given to the waddling bird mascot of the Original Penguin brand, which is celebrating its 60th anniversary this year. The label, which has been owned by Perry Ellis International Inc. since 1996, will commemorate the milestone on Thursday with an event at its NoHo flagship in New York that will feature a performance by the indie rock band Life in Film.

Outside of the party, the brand is launching a special anniversary capsule for fall featuring pieces that have been core to the label since its inception, including polos, T-shirts, wovens, swim trunks and outerwear. And it has also developed an elevated assortment under the Blue Label name, a line that is being sold at Saks Fifth Avenue and Bloomingdale’s.

“Original Penguin was the first acquisition we made,” said Oscar Feldenkreis, president and chief operating officer of PEI, in an interview at the company’s New York City offices. “We originally bought it for its strong golf business. But it’s been the fastest-growing brand for our company.”

Ironically, today the brand offers no golf apparel, opting instead to focus on sportswear for men and children. Original Penguin is carried in more than 1,250 stores across the U.S., Canada, Europe and South America and there are 111 freestanding Original Penguin stores worldwide, 22 in the U.S. and the balance internationally.

“It will have $450 million in worldwide retail sales this year,” George Feldenkreis revealed, “which is up 22 percent over last year. We have 39 licenses domestically and internationally, and we just took our accessories business in-house. It’s an important part of our business.

“As we expand to other continents, we see tremendous opportunity. We think it has the opportunity to be a $1 billion brand,” he added.

Original Penguin traces its roots to the Munsingwear underwear factory in Minnesota, where in 1955 a salesman for the brand knocked back a few too many cocktails in a New York City bar before heading back home. He stumbled across a display of stuffed penguins at a taxidermy shop and bought one, naming him Pete. On the flight home a flight attention wrapped the man’s tie around the penguin’s neck and suggested he’d look good as a logo embroidered on a polo shirt.

And so, the Munsingwear golf shirt was born.

For the past three years, the line has been designed by Adam Weir, vice president of design, who has advanced it beyond its core classifications into more of a lifestyle brand, George Feldenkreis said.

“We’d like to grow each equally,” George Feldenkreis said. “We see direct-to-consumer as a strong vehicle for us but we also see wholesale as an opportunity.”

In reporting its second-quarter results last week, PEI pointed to Original Penguin as one of its strongest performing brands, along with Perry Ellis and Rafaella. Original Penguin posted a 17 percent sales gain in U.S. wholesale sales in the period, driven by shorts, swimwear, polos, T-shirts and wovens, the company said. Its licensing income rose 12 percent.

Looking ahead to fall, the company is hoping to expand its reach in outerwear and bottoms. And the brand recently signed licenses for dress shirts, tailored clothing, luggage and bedding in Mexico.

All told, Original Penguin is in 56 countries. George Feldenkreis said the company manages the U.S. and European operations internally and the other countries are operated through other local partners. “We just signed a deal in India,” he said, “and we’re in the process of taking the brand to the Middle East.”

In its second-quarter conference call, the company said the European wholesale business grew in the double digits “as we continue to expand the brand’s footprint in the territory.” That includes gaining additional square footage at Galeries Lafayette for fall, including the opening of a shop-in-shop at the Boulevard Haussmann store. Other retail customers in Europe include El Corte Inglés and Coin, and the brand recently relocated its U.K. flagship store in London from Covent Garden to Long Acre, “a prime location for men’s wear. And we are set to open two new doors next month in Ashford and York,” George Feldenkreis, chairman and chief executive officer, said.

In Canada, the brand has installed fixtures at 11 Hudson’s Bay Co. stores and the performance of the label at Nordstrom in that country is strong, George Feldenkreis said.

The performance of Original Penguin has been a bright spot for PEI, which has been mired for much of the last year in a battle with activist investors that led to a proxy fight with Legion Partners Asset Management LLC, a California investment fund, and the California State Teachers’ Retirement System, which own a combined 6.3 percent of the company’s common stock. The investors were seeking a separation of the chairman and chief executive officer roles held by George Feldenkreis, and the declassification of the board.

That led the company to appoint former PVH Corp. chief executive officer Bruce Klatsky and Michael Rayden, who had headed Pacific Sunwear and Tween Brands, to its board of directors. George Feldenkreis also agreed to relinquish the title of ceo to Oscar Feldenkreis in January.

While things have settled, Legion dropped its proxy fight but the company said in a regulatory filing with the Securities and Exchange Commission on May 26 that it will “continue to hold the board and management accountable for achieving the company’s current-year [earnings before interest, taxes, depreciation and amortization] margin target of 6 percent and the 2019 EBITDA margin target of 10 percent.”

Achieving those objectives will undoubtedly be helped by the planned growth initiatives at Original Penguin.

The target customer is a 25-35-year-old seeking clothes he can wear to work and on the weekend. And pushing into tailored clothing and dress shirts for spring is also expected to expand its reach beyond casualwear.

“As we build this into a lifestyle company, licenses are integral,” Oscar Feldenkreis said.

That includes accessories, which will be a “real big push for spring and fall 2016.”

The 25-piece capsule collection for the 60th anniversary is also expected to give the brand a bump in sales.

“It’s a vignette moment,” Weir said. “We wanted to celebrate the anniversary and talk about it.” The collection features overdyed and washed finishes on tops, bottoms and jackets that are intended to have a vintage feel. Even Pete the penguin was updated with a gold finish.

“They look like the garments you’d find in a garage or attic,” Weir said. “They’re products for every guy, not something you’d find on the catwalk.” Price points for the capsule are $55-$99 for wovens, $79 for swim trunks and $119 to $150 for outerwear.
Then there’s Blue Label.

The merchandise retails for 20 percent higher than the flagship line, with some swimwear pieces selling for $165 or more. It’s the brand’s attempt to compete with market leaders Vilebrequin and Orlebar Brown. The Blue Label will also be sold in the company’s Original Penguin stores.