LOS ANGELES — What started out as pricy marketing campaign for Ripndip might have the potential to be something more lucrative for the Los Angeles skate brand.

The company on Friday will host another River Float this time at surf park BSR Surf Resort in Waco, Tex. It’s projecting some 3,000 attendees for the third annual event, up from last year’s float, which drew a crowd of 2,000.

The event first began as an idea by Ripndip founder Ryan O’Connor as means of doing something fun and head-turning for the brand’s fans. It’s a big expense: it’s free for all ages and comes with a complementary Ripndip floatie for every attendee. This year’s event has also grown to include three Ripndip merchandise pop-ups that will include event-specific T-shirts and other pieces with the range retailing from $10 to $75. Performances from Paul Wall, Young Gravy and others are also part of the event.

“The cost of putting something like this on sometimes outweighs what we could sell through the booth, through the pop-ups,” O’Connor said. “But maybe this year the pop-ups will pay for the event. That’s the goal. But it is still marketing until we start charging for tickets, which maybe next year we get 10,000 people or something crazy. We’re still working on the logistics of having a festival.”

The idea of an apparel company wanting to get into the festival business — beyond simply sponsorship status — doesn’t sound so farfetched at a time when the siloed approach to business, career and personal lives continues to be challenged and there’s more and more overlap among industries. There’s certainly precedent in, for example, e-tailer Revolve with its Coachella extravaganzas that have included festivals on the Merv Griffin estate in La Quinta and hotel takeovers.

There’s also potential to create branded festivals that can travel to different markets — the pop-up shop concept blown out exponentially. 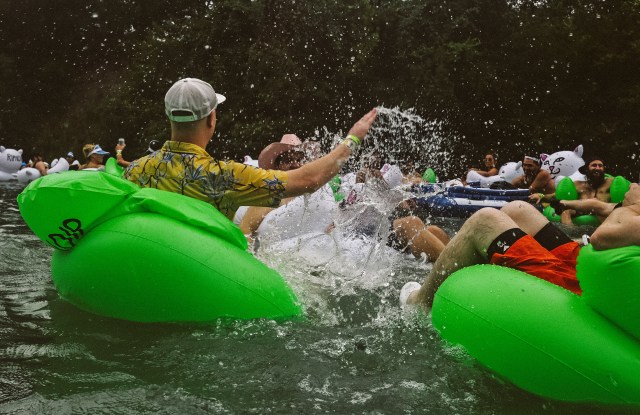 “We could build a name for ourselves for festivals like Ripndip Fest or Ripndip River Float and you would know what to expect with all these crazy inflatables and there’s going to be cool pop ups and music.”

The challenge as O’Connor seeks to continue adding fuel to the concept is not losing sight of their grassroots nature with something more corporate.

“It might make sense after this one to partner with an event organizer. Someone that’s done 100-plus festivals so we can focus on the marketing and not have to worry about logistics,” he said. “But you know the difference and the feeling when there’s a bunch of people in blue uniforms and there’s a weird feeling.”

To help manage the growing event, Ripndip’s enlisted roughly 30 Zumiez employees to help with the event with another 50 or so from Ripndip and security also working the River Float.

Zumiez, which sells Ripndip across all of its stores, is often tapped for temporary help with the company’s events, which O’Connor said makes sense enlisting people who already know and understand the brand.

O’Connor also has his sights set on an Area 51 event, which could happen as early as within the next month with alien-inspired merchandise. Among the company’s cast of cartoonish brand ambassadors often seen on its products is Lord Alien, hence the reason for an Area 51 event.

O’Connor started Ripndip in 2009 selling shirts that read “Ripndip” for $10 with the brand’s early stage inventory made out of his parent’s Florida garage. The privately held business, which doesn’t disclose financial information, relocated to California in 2011 and today is sold in more than 1,000 stores globally, including Zumiez, Active Ride Shop, Dolls Kill, HBX and a number of skate shops.

In February, the company opened its first overseas store in Tokyo with the help of a distributor and in September opens a Hong Kong store. Another Ripndip collaboration with Teddy Fresh, the brand started by YouTuber Hila Klein of h3h3Productions, is also due out in September. In Los Angeles the company inked a five-year lease for a new space on Fairfax Avenue just two doors down from its current space.