The upcoming capsule collection for Macy’s is inspired by the Olympic Summer Games. 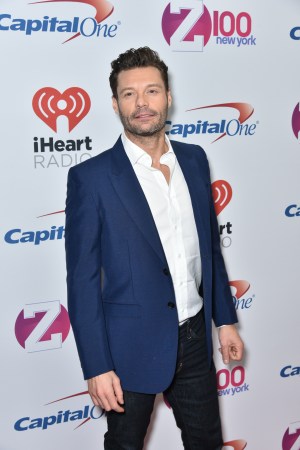 It’s a tough job but somebody’s got to do it.

Ryan Seacrest will broadcast live from Copacabana beach when he hosts NBC’s late-night coverage of the 2016 Summer Olympics in Rio de Janeiro.

“Yeah, it’s a tough gig,” he said with a chuckle. “But it’s not as easy as you think. I’ve really got to study my sports.”

The beachside location will also give Seacrest a chance to showcase his new capsule collection of sportswear, Ryan Seacrest Distinction Rio. The 13-piece offering, which is being produced by Weatherproof Garment Co. and Randa Accessories, will be carried exclusively in 150 Macy’s doors and at macys.com beginning next month and “until we sell it all,” Seacrest said.

This follows the retailer’s exclusive launch of tailored clothing and furnishings in 2014 and the extension into sweaters, outerwear, scarves, gloves and travel bags last year.

“This was my first time playing in this playground,” Seacrest said of his fashion line. “So it relieves me [that it is a success]. I’ve learned a lot and the line continues to evolve.”

The “first step into sportswear” is a logical extension, he said, and he hopes the capsule will lead to a more permanent offering.

But the focus now is on the limited-edition line inspired by the Summer Games. “We looked at the rhythm, geography and color of Rio to come up with the pieces,” he said. In addition to its casual, comfortable vibe, Ryan Seacrest Distinction Rio offers items that can be used for multiple purposes and easily transition from day to night, he said.

Among the items are a banded-bottom polo for $60, chambray shorts for $60, a fedora for $42 and a color-blocked Windbreaker for $135. There are also lightweight sweaters, oxford shirts, swim trunks, espadrilles, a knit blazer and a duffle bag.

Seacrest said he especially likes the blazer, fedora and travel bag and expects to get a lot of use out of the Windbreaker. “It’s windy on the beach,” he said. “I just hope it doesn’t rain.”

The Ryan Seacrest Distinction collection has been successful for Macy’s, particularly its furnishings, and has been the strongest men’s dress clothing brand launch in more than a decade, according to Seacrest’s team.

Durand Guion, vice president and men’s fashion director for Macy’s, said the idea for sportswear came about after an annual summit with the star and the brand’s licensee partners. When it came up that Seacrest would be working the Olympics, “we said, ‘Well, you’re not going to be wearing a tailored suit and a tie bar in Rio.’ So it opened a dialogue to create a capsule. It came about organically and quickly.”

The idea for the “very focused and very limited-edition” line, Guion said, was to identify the key items Seacrest would need during his time in Brazil. “A great polo, the perfect swim trunk, the perfect espadrille — it’s new for us to create a head-to-toe concept and tell a story. But it was a lot of fun to work on.”

Guion said the line will hit stores on June 15 and may well be sold out before the Games begin in August. But that’s the timing that worked best for Macy’s. “There’s no obvious Olympics tie-in and we thought it would be perfect for high summer, before Father’s Day and the Fourth of July.”

Guion said Macy’s will be analyzing the performance of the line closely as it works to build the brand into other classifications.

And while it won’t necessarily be a Macy’s exclusive, Seacrest is already at work on a new category of business: grooming. He’s partnering with his long-time dermatologist, Dr. Harold Lancer of Beverly Hills, on a men’s skin-care line that will launch early next year. It will likely include facial cleanser, moisturizer and sunscreen.