The collection was inspired by the legendary marathoner and features some of his signature styles.

Bill Rodgers has partnered with Tracksmith on a capsule.

Matt Taylor is a real student of running.

The cofounder and chief executive officer of Boston-based Tracksmith has studied the history of the sport — from gold medal-winning performances to the evolution of the fabrics and details that are best suited for competitive athletes and weekend warriors. He turned his passion into a business, creating Tracksmith in 2014 to service runners with high-quality gear for their training and racing.

So it’s no surprise that he chose today, when the Boston Marathon would have kicked off in a non-pandemic year, to unveil a collaboration with famed marathoner Bill Rodgers, who won the Boston road race four times, twice breaking the American record. (This year’s race has been moved to October.)

Rodgers also won the New York City marathon four times, as well as the Fukuoka Marathon, and in 1977, was the only runner to hold championship trophies for three major marathons at the same time.

Taylor said the idea for the Tracksmith Bill Rodgers Collection came about after he discovered some vintage pieces on eBay from the Bill Rodgers & Company collection that the athlete created in 1978. “I went down a Bill Rodgers rabbit hole,” Taylor said with a laugh, adding that he scoured the site and bought several “timeless and classic” original pieces including singlets, shorts and jackets. He discovered Rodgers was a pioneer of many of the fabrics and details that have become commonplace today. That includes women’s-specific silhouettes, reflective details and cotton-polyester thread designed to stretch. 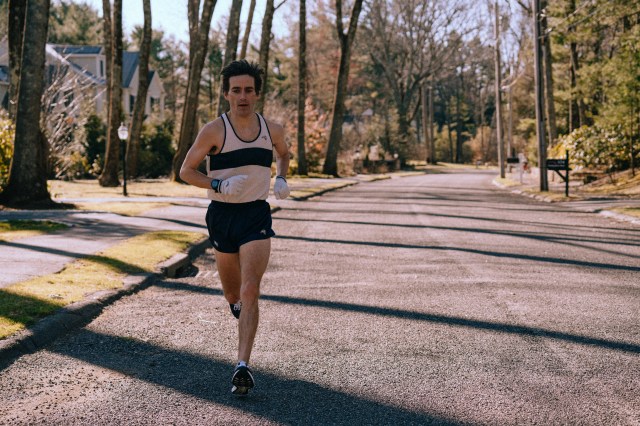 After he met Rodgers, they started to share stories and what it meant to be “an entrepreneur and an athlete,” which led to a conversation about a potential collaboration.

“Matt and I are like birds of a feather,” Rodgers said. “We both love the sport and we both know a lot about the history.”

He said that before the 1970s, running apparel and footwear was “pretty primitive so it’s no wonder that not many people wanted to get out there, especially in bad weather. You looked ridiculous, you felt terrible and it was ugly,” he said. So he set out to offer alternatives. And although Bill Rodgers & Company is “closed and gone,” he’s happy that Tracksmith has used it as a guide for a modern-day collection with updated fabrics that includes a new BR logo and also provide a platform to speak about both his history and the history of the sport.

Highlights of the Tracksmith Bill Rodgers collection include a windbreaker inspired by a reflective jacket in Rodgers’ collection with a detachable hood, 360-degree reflectivity, a lightweight Schoeller water-repellent shell and mesh lining. There’s also a post-race yellow and green striped rugby based on the shirt loaned to Rodgers by a Boston bartender after he dropped out of the 1977 marathon on the Newton Hills and went into a local watering hole to drown his sorrows. The 2021 version is 100 percent cotton and features a button placket and ventilation holes under the arms.

Additional styles for men and women include an open mesh singlet and 3-inch inseam shorts that draw inspiration from the kit Rodgers wore to win the 1979 Boston Marathon made from a spun polyester jacquard mesh with a tricot stripe. The collection also features Rodgers’ signature knit cap and white gloves, this time in merino wool. 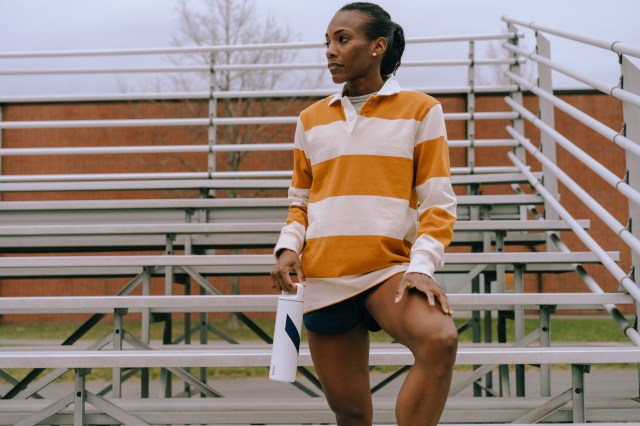 The rugby shirt is intended for pre- or post-racewear.

Rodgers will undoubtedly sport pieces from the line when he hits the starting line at races this year. Now 73, the athlete said he continues to run “in limited doses,” with the half marathon his longest distance these days. But that doesn’t mean he always takes home a trophy.

“I’ve been running for 57 years and it can help you keep your health, but I can’t compete against the top guys in their 70s,” he admitted. “I can compete against most of them, and sometimes I can win my age group, but if you started running when you were 55 years old, and you really push it, you can change your life and become one of the best. The door is open. But for me or Frank Shorter or Greg Meyer, we’ve got a lot of miles on our bodies. I tallied my logs last year and I’ve run 185,000 miles in my career. That’s a lot of miles on my body. I still love the sport, and those of us who are older, we’re trying.”

And he’s still beating the drum for his sport and others as a way live a long and healthy life.

“The pandemic was a crushing blow for all of us. But if you’re a cyclist or a runner, if you get out the door, it’s a way to fight against the pandemic, that’s the way I think about it. I’ve always been a believer in the sport, it’s more than a sport. The bottom line isn’t how much money you make, but how you live.”

But the professional end of running has changed significantly since Rodgers and his contemporaries made history. That includes the so-far elusive quest to break two hours in a sanctioned marathon, a goal Nike Inc. started chasing in 2017 and finally reached on Oct. 12, 2019 when Eliud Kipchoge ran 1:59:40. The made-for-TV moment, however, was not recognized because it did not meet international running standards.

Even so, Rodgers believes that running under two hours in real-life conditions is possible someday. “You can’t say no,” he said. “I think it’s going to be tough, but competition is everything. It’s the ultimate challenge — what can a human do? Eliud Kipchoge and the great Ethiopian runner, [Kenenisa] Bekele have come close, but it was easier because they had pacing, they say the new shoes are worth 3 to 4 percent and the sport has changed so much to be all cool-weather racing on flat courses like Berlin, London or Chicago. I think it’s exciting. I love the challenge and I think it’s possible, sure.”

Even though the runners who have come closest to breaking that record are non-Americans, Rodgers hasn’t given up on U.S. running quite yet.

“The Americans are doing great in a time when worldwide marathoning has been dominated by runners primarily from Kenya and Ethiopia,” he said. “There’s a lot of different reasons for their success: their drive, their focus, the feeling that they have to be the best. America has a lot of that too but we have so many other sports in America. Kenya and Ethiopia don’t have football and baseball and these other sports that get all this money and support.

“But if you take a look at Rio: Desi [Desiree Linden], Shalane [Flanahan], [Amy] Cragg, Meb [Keflezighi] and Galen Rupp [who won the bronze medal] — all ran great. I’d like to see a team medal given in marathon, because this is probably the most competitive sport in the world for an individual and the Kenyans and Ethiopians feel they have to win, it’s natural pride. And that’s tough to go against.”

Tracksmith Bill Rodgers Collection will be available starting today on the Tracksmith site. It will retail from $38 to $188. Over the years, the brand has also created capsules for other legends of the sport including Bobbi Gibb, who was actually the first woman to run the Boston Marathon, a year before the more-famous Kathrine Switzer, as well as the Ted Corbitt, a Black ultramarathoner from the 1960s and ‘70s. “We feel a little bit of a responsibility to keep these stories alive continue the legacy of the sport,” Taylor said.