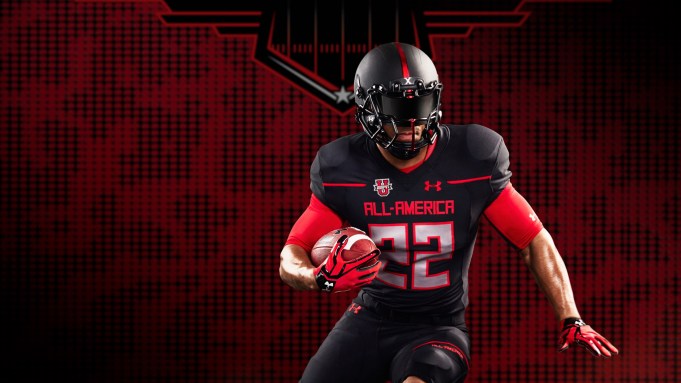 Under Armour has unveiled the uniforms that players will wear in the ninth annual Under Armour All-America Football Game, scheduled to be played Jan. 2 at the Orlando Citrus Bowl. The game, which will feature more than 90 of the game’s best senior high school players including number-one ranked defensive tackle Rashan Gary, will be televised live on ESPN2.

Under Armour is the official provider of all on-and off-field apparel and has created uniforms designed to speak to the brand’s heritage. This marks the 20th anniversary of the Baltimore-based activewear brand and the use of white, black and red speak to its beginnings. Red striping on the helmets is intended to mimic the progression of the company over the last two decades and the uniforms are inspired by the compression shirt that founder Kevin Plank developed when he started the brand.

The red of the uniform is toned down, but the color on the footwear and gloves is more pronounced. They are made with ArmourGrid fabric, which features four-way stretch sleeves, shoulders and side panels to ensure movement, as well as HeatGear, a proprietary fabric designed to keep players cool. Special cleats and gloves were also designed for the game.