The show will be live from Gotham Hall in New York and feature celebrities including Ashley Graham, Bella Hadid and Lucky Blue Smith.

Hugo Boss is determined to be seen as more than just a suit brand, especially now in the continuing throes of a global pandemic where most people continue to work from home in more-casual clothes.

First up was its capsule collection with the National Basketball Association that launched last month. And today, its first collaboration with Russell Athletic will drop.

The Boss x Russell Athletic collaboration includes some 30 pieces of apparel, accessories and footwear — most of which are unisex — that blend the German brand’s expertise in tailoring with Russell’s sportswear aesthetic. The assortment includes blazers and tailored shorts as well as joggers, sweatshirts, sweaters and bomber jackets. 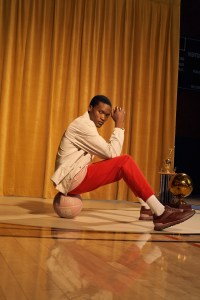 To introduce the collection, Boss will host a digital fashion show on boss.com today at 2 p.m. EST after which the collection will be offered for sale. For those who sign up for the Boss newsletter in advance, they were able to shop the line 24 hours earlier. The show, which will be aired live from Gotham Hall in New York City, will feature well-known faces including Ashley Graham, Bella Hadid, Lucky Blue Smith, Keith Powers, Anthony Reeves, Taylor Hill and Miles Richie, the son of Lionel Richie.

In select stores around the world, there will also be an augmented-reality basketball game that can be accessed through a QR code in-store and allows viewers to test their shooting skills. The scores will be compiled and the highest scorers will win an exclusive Boss x Russell Athletic basketball.

To further highlight the collaboration, the brands worked with Highsnobiety, which developed a campaign and film shot by Joshua Kissi.

Ingo Wilts, chief brand officer of Hugo Boss, said he’s been a fan of Russell since he first visited New York and bought a Russell sweatshirt and immediately began pondering what it would be like to collaborate.

Although his desire to increase the brand’s penetration and focus on sportswear had started before the pandemic, the health crisis accelerated that strategy. The goal, he said, particularly in the U.S., was to help customers “view Boss in a new way, not just as a suit brand.”

Conversations with Russell started in February 2020 and the result is a collection that was created entirely through virtual meetings. “We never met,” Wilts said, adding that despite the challenges, the assortment came together well and was even larger than initially expected.

Ricardo Aranda, vice president of Russell Athletic, said: “This has been a year in the making. For us, this represented the opportunity to work with a globally admired brand. We have 120 years of history, but this helps us spin into fashion. We couldn’t think of a better brand to work with. Hugo Boss has a much broader international footprint and gives us an opportunity to engage with a new customer.”

Wilts said that the two brands are already working on a second collection that will launch in September. 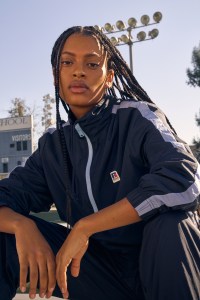 The collection features both men’s and women’s wear.

In the past, Boss has partnered with Porsche and British musician Liam Payne on capsules while Russell has collaborated with everyone from Kith and Chinatown Market to Rassvet.

In reporting its earnings earlier this month, Hugo Boss said although overall sales fell 33 percent to 1.95 billion euros last year, compared to 2.88 billion euros in 2019, the company is expecting a rebound this year as it continues to expand beyond tailored clothing. “We want Boss to be a lifestyle brand that accompanies the modern man, 24/7,” said Yves Müller, spokesperson for the Hugo Boss board. “When you wake up, you go to the bathroom, you put on the Boss cologne. Then you go to work, you chill at home, or you’re invited to a dinner party. We want Boss to be there.”

Russell, too, experienced a “roller coaster of a year in 2020,” Aranda said. Although its team and collegiate product offerings were impacted by cancellations of sports and school closures, the online business skyrocketed, with triple-digit growth on the brand’s e-commerce site. Among the best-selling items was fleece as well as “anything connected to working from home,” he said.

Russell managed to increase both the number of customers as well as the average order size by offering new tools and technology such as exclusive prints and an expanded custom offering, he said. And like Hugo Boss, the picture is brighter for this year. “We got through 2020 the best we could,” he said. “And we’re seeing the momentum continuing into 2021.”