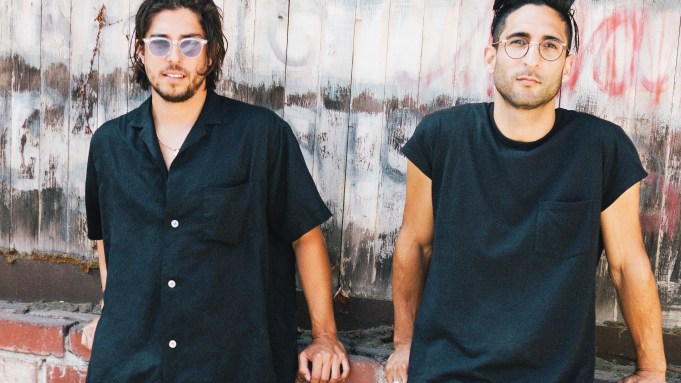 A rebellious masculine figure has seized the imaginations of designers in the men’s fashion industry.

Brandon Schoolhouse christened his jewelry business after him, attracting celebrity customers such as Brad Pitt. Mike Rubin toiled on the San Francisco docks with him before instilling that memory into his forthcoming spring collection. Josh Willis’ grandmother forbade him from shaving his head when he was a teen lest he would have been mistaken for him.

The man who has inspired both admiration and apprehension is none other than the cholo, who has left an indelible imprint on Han Cholo’s Schoolhouse, Krammer & Stoudt’s Rubin, Second/Layer’s Willis and other designers.

Formally defined as a Latin American person with Indian blood, a cholo has taken on the slang meaning of a teen boy who is a member of a street gang. What the cholo typically wore — pressed Dickies, white ribbed tank tops, plaid Pendleton shirts buttoned up to the neck and crisp sneakers — has stuck with the designers who grew up in California.

“You were a baller on a budget,” said Schoolhouse, a third-generation Angeleno who had adopted Han Cholo as his DJ sobriquet before transferring the name to his Los Angeles-based jewelry brand, which is sold at Urban Outfitters, Zumiez and stores as far away as Iceland, Germany and Taiwan.

“It’s a toughness but you look good.”

Given that trends repeat themselves in the fashion industry every 20 years or so, it was just a matter of time before designers turned their attention to the cholo. For those who grew up in the Nineties, it’s another piece of the era’s pop culture for which they’ve become nostalgic. What’s more, the masculine ideal is one that locals can call their own.

“It’s one of the few subcultures that, I guess, is an American subculture,” said Alejandro Rodriguez, 30, founder and designer of Beautiful Fül. “Now that you have all these designers growing up in L.A., they see it’s lacking.”

Designers like Rodriguez aren’t exactly crafting the new cholo uniform for Millennials. Rather, it’s part of their personality and background. Growing up in Southern California, they were also exposed to skateboarding, punk rock, hip-hop, graffiti art and low rider cars. They draw from the cholo style as they do from their memories of these other seminal subcultures to make cool clothes.

“They grew up taking in all these influences,” Rodriguez said. “That’s why it’s very apparent in their designs.”

Apparel giants are swayed by L.A.’s street culture, too. Levi’s, Nike, Vans, Diesel, Rvca and Stüssy are several of the brands that have tapped Mister Cartoon, a tattoo artist who bases his signature black-and-gray style on graffiti, prison art and sign graphics, as a collaborator.

Born in downtown Los Angeles and raised around the city’s harbor, he’s inked Eminem and Justin Timberlake, and crossed the globe to meet fans in countries like Thailand.

“Using old English and script fonts that have been around in L.A. since the Seventies and that are popular within the street community has become more popular in fashion,” said Mark Machado, who goes by Mister Cartoon in the tattoo world.

In Rubin’s case, his journey started at his birthplace east of L.A. in South Gate 58 years ago and progressed to Anaheim, Costa Mesa, Huntington Beach, San Francisco and eventually New York, where he started Krammer & Stoudt in 2012.

While the presence of cholos was always felt, he tried to keep to the periphery when he scoured thrift stores in their neighborhoods. His mom’s warning to him was: “Watch out for those guys, be careful.”

During a stint at art school in the Bay Area, Machado once worked side by side on the docks with some cholos, who tucked guns inside their galoshes and went cruising south to San Jose in their Chevy Impalas and Buick Regals.

“Anything that is a mystery to me interests me,” Rubin said. “I like to think that, when I put together a collection, it is like cooking. I want to season it lightly from here and there — the different subcultures like cholos and surfers.”

Whether true cholos still exist is debatable. If they are around, they would have a chuckle that their style, put together at swap meets, discount marts and East L.A. stores like Greenspan’s, has inspired various designers to sell $200 shirts, $250 trousers and $1,000 suits at selective shops such as United Arrows in Tokyo, Gentry in Brooklyn, and H. Lorenzo in Los Angeles.

Produced in places like Los Angeles, New York and Portugal, the quality of the clothes is high, and the customer moves within that coveted demographic known as the creative class.

The creators of Second/Layer have come around to acknowledging the role that cholos played in their lives. Growing up in Riverside, Willis remembered, “I didn’t want to wear Dickies. I wanted to wear vintage and [clothes made by] surf companies and skate companies. I wanted to look at Thrasher instead of Teen Angels.” His Mexican grandmother wouldn’t let him leave the house in a wrinkled shirt. “I had to go back and iron it,” the 33-year-old said. “I hated it.”

Now, working with his younger brother Jacob and Anthony de Padovane on their three-year-old label, Willis finds inspiration in the clean aesthetic his grandmother advocated, Giorgio Armani ads circa 1987 to 1993, zoot suits worn by Pachucos in the Forties and the easy California lifestyle that allows them to skate, surf, camp and enjoy the outdoors.

De Padovane, 32, pointed out that the cholo is not an image they pin to their mood board, although he conceded that they did co-opt the cholos’ hairnets in their first season. “There is always going to be an undertone of how and where we grew up,” he said. “We stay true to ourselves.”

“It comes naturally to us,” added Willis, who is so attached to his hometown that he slapped a sticker of “Los Angeles” written in old English script on the back of his phone. “It’s part of the swag.”

Unfortunately, some companies cheat to get that swag. Aware of the fashion industry’s perennial interest in L.A. street life, Mister Cartoon has witnessed brands copying not only his unique fonts but also his business partner Estevan Oriol’s photography. But those who lack scruples also miss a key element — authenticity.