The sportswear label has a new collaboration with bodybuilder Ric Drasin to be sold at Dover Street Market.

Yeah, I Work Out has collaborated with Ric Drasin for a collection exclusive to Dover Streeet Market.

LOS ANGELES — With so many brands vying for attention in the activewear space with their moisture wicking and four-way stretch, Yeah, I Work Out bypassed the noise by choosing to root its collections in the bodybuilding community — with some interesting results.

The fairly new line has found success among both the core of those who actually like to pump iron and the fashion set, with the help of retail partners Dover Street Market and Mr Porter.

Y,IWO on Friday will release its collaboration with industry veteran Ric Drasin, creator of the Gold’s Gym logo. The capsule launches at Dover Street Market’s Los Angeles store, where there will also be a Y,IWO installation inspired by the Muscle Beach Gym in Venice, Calif. Distribution will later expand to additional Dover Street Markets, with the line also sold through Y,IWO’s web shop.

The pieces draw from the archives of Drasin’s Eighties line Big Boy Clothing, using three designs: “Lifestyles of the Ripped and Aimless,” “Gym Bums of California” and “Club Sweat.” The designs will be featured on shorts, T-shirts, hoodies, muscle pants and sweatpants. 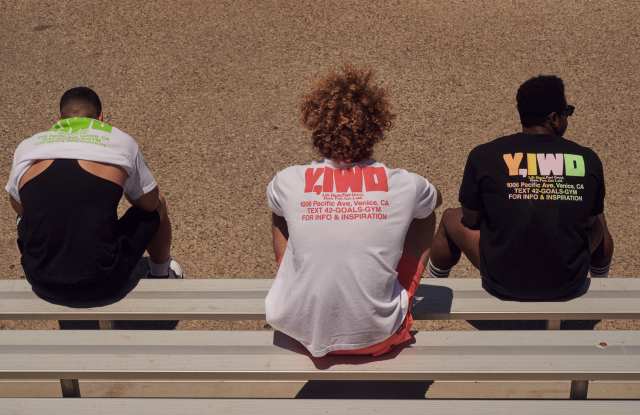 “We’re a brand that’s rooted in lifting culture, body building and power lifting,” founder Jason Thome said. “I’ve always loved the iconography, everything from the film ‘Pumping Iron’ to the muscle cars and the California vibes that come with all of that. When you think about ‘Pumping Iron,’ it’s a seminal moment in sportswear. It’s such an iconic moment in time and it’s funny because I’d never seen anything out there with that vibe in place.”

He also had a hunch his brand didn’t have to live only within the core customer base of body builders and that its designs could bridge that community with a more mainstream customer base. This is why it made sense to take a more elevated approach when it came to distribution, partnering with a retailer like Dover Street Market.

“I think this brand is conceptual,” Thome said. “Dover Street really champions brands that take a conceptual approach to what they do. It is lifting and bodybuilding, but it’s this high-brow, low-brow thing.”

Most of the line is made in Los Angeles, with a few cut-and-sew pieces manufactured overseas. The company is set to collaborate in the future with the Ace Hotel, marking another first for the brand with a collaboration in the hospitality space as the hotel prepares to open a gym in its Brooklyn location.

Most of the brand’s current customer base is male, but it’s the blend of people the line attracts that’s particularly interesting, Thome said. He pointed out a Y,IWO customer could range from trainers and bodybuilders to photographers and models.

“I always felt like it could manifest that way,” he said of the brand’s reach. “When I think about a lot of these skate brands that are core with their skate crews but then Brain Dead, for example, is a skate brand [and] it’s also at Dover Street Market. It has people who are in fashion interested in it. I feel like we can sit in that zone as well. It [the diverse appeal] didn’t surprise me, but it was really cool to see it happen.”