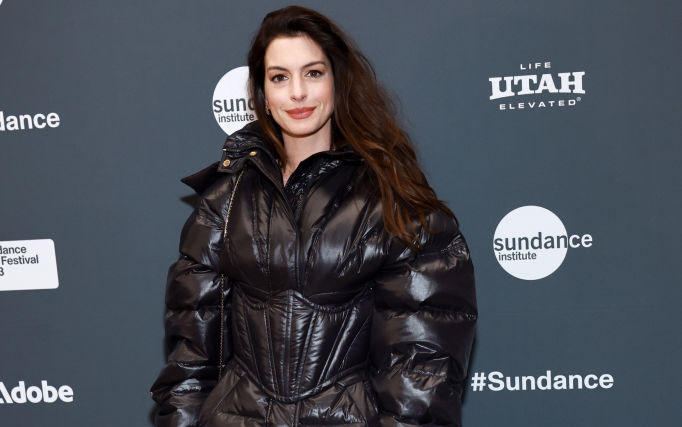 Anne Hathaway attended the 2023 Sundance Film Festival in Park City, Utah, on Saturday in an all-black winter-ready Versace ensemble for the premiere of the film, “Eileen,” which she stars in.

Hathaway’s outfit was from the brand’s winter 2022 ready-to-wear collection. It included a padded sleek coat, with a corset like insert on the bodice that cinched her at the waist and had a slight oversize silhouette. Underneath the coat, she wore a textured black minidress with gold detailing on the straps and a gold embroidery on the hem of the skirt.

She accented her look with gold and silver jewelry, as well as square-toed, lace-up black platform boots. Hathaway was styled by Erin Walsh, who has also styled Jameela Jamil, Ashley Park and Lucy Hale.

Hathaway’s hair was wavy, framing her shoulders. Her makeup embraced a winter tones, with dark blush and a burgundy red lip.

Hathaway joined her costars, including Marin Ireland, Shea Whigham and Thomasin McKenzie for the premiere of “Eileen.” The film, directed by “Lady Macbeth”‘s William Oldroyd, is based on the 1960s novel of the same name by Ottessa Moshfegh. It’s a psychological thriller about a young woman who befriends a coworker when all of a sudden things take a sinister turn.

The 2023 Sundance Film Festival takes place from Jan. 19 to Jan. 29 in Park City. This year, the festival features a hybrid format, screening films both in-person and online. This is the first in-person event after the event was completely virtual for the past two years. The annual film festival features new documentary features, short films and episodic content. The event also features prizes, including the Directing Award and the Festival Favorite Award.