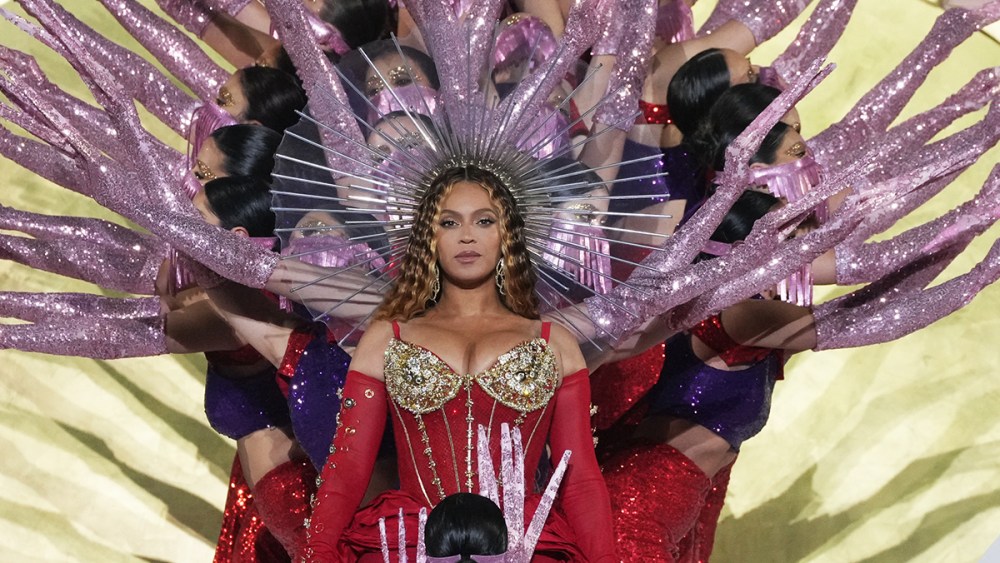 Fireworks were bursting and so was the onstage glamour when Beyoncé opened her highly anticipated performance at Atlantis The Royal hotel’s “Grand Reveal Weekend” on Saturday in Dubai.

The singer made a vibrant entrance in a bright yellow gown with scale-like details by Atelier Zuhra. The custom dress featured a bustier-style bodice with sheer panels and a skirt that was cut with two side slits at the center. Behind her back, she had on a full-body piece covered in feathers that gave the look a dramatic finish.

Beyoncé’s daughter Blue Ivy Carter joined her onstage for a duet to “Brown Skin Girl,” with the 11-year-old wearing a red sequined blazer and matching trousers.

“Bigger Is Better” was an apt song choice for Beyoncé’s silver sunburst headpiece that was teamed with a red Nicolas Jebran gown. It incorporated a pleated skirt and pants, and a sequined bodice-style top with gold piping and embellished gold bra cups. The embellishments continued with gold-tone hardware on her opera gloves. The brand called it a “milestone” in a caption for illustrations of the look, adding that it was “the art of creating moments to live up to.”

For the finale, set to “Drunk in Love,” she was erected from the stage on a pillar as fireworks lit up the sky and flames emerged from the water. She closed the show in a pink corset dress with crystal-embellished leggings and opera gloves by Ukrainian brand Frolov.

Among the star-studded guest list, her husband Jay Z and twins Rumi and Sir, as well as her mother Tina Knowles Lawson and father Matthew Knowles enjoyed the show.

Other bold-faced names in the audience included Chloe and Halle Bailey, Rebel Wilson, Nia Long and Kendall Jenner, whose 818 Tequila brand held a soiree on Friday at the luxury resort’s Cloud 22 rooftop lounge.

Swedish House Mafia wrapped the night with an after party.

Beyoncé earned a reported $24 million for the intimate concert, which was her first in five years. The set list included: “At Last,” “XO,” “Flaws and All,” “Ave Maria,” “Halo,” “Brown Skin Girl,” “Be Alive,” “Otherside” “Bigger,” “Spirit,” “Freedom,” “I Care,” “Beautiful Liar,” “Crazy in Love,” “Countdown,” “Naughty Girl” and “Drunk in Love.” No songs from her new “Renaissance” album were performed.

Atlantis The Royal hotel’s “Grand Reveal Weekend” comes as the resort readies to launch bookings in February. On Sunday, it will host a fashion to debut Beyoncé’s latest Ivy Park collection.