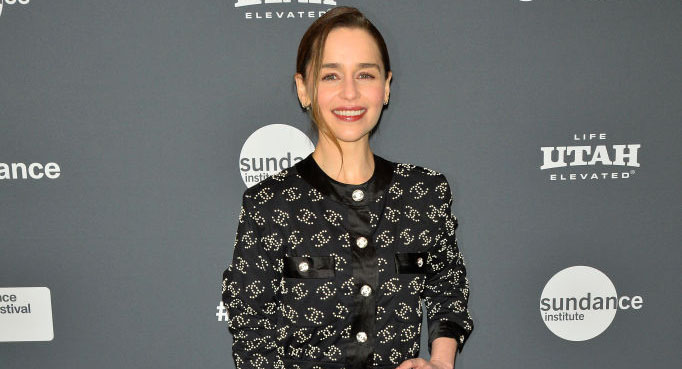 Emilia Clarke arrived on the red carpet for the premiere of “The Pod Generation” at the 2023 Sundance Film Festival on Jan. 19 in Park City, Utah, wearing a logomania-inspired ensemble.

In honor of this year’s film festival, the actress wore a black Chanel jersey and imitation pearl silk jacket with the brand’s signature allover interlocking CC logo, paired with a matching imitation pearl and silk skirt. She coordinated the look with sheer tights and complementary black Chanel metal and strass pumps and small hoop earrings.

Clarke’s look was from Chanel’s resort 2023 collection designed by artistic director Virginie Viard. The brand’s show, held in Monaco that season, paid homage to Princess Caroline of Monaco and the pop culture of the region.

For makeup, Clarke went for a red-carpet ready look featuring a glossy lip, blush, subtle mascara and earth-tone eye shadow. Her hair was pinned in the back and had a single long cascading strand framing her face.

“The Pod Generation” is a new film where Clarke plays the female lead. The movie tells the story of a couple in a futuristic version of New York City who use technology such as detachable artificial wombs and pods to start their family. In addition to Clarke, the film also stars Chiwetel Ejiofor, Rosalie Craig and Vinette Robinson.

The 2023 Sundance Film Festival is taking place from Jan. 19 to Jan. 29 in Park City, Utah. This year, the festival features a hybrid format, screening films both in-person and online. This is the first in-person event after the festival was completely virtual for the past two years. The annual film festival presents new documentary features, short films and episodic content. The event also features prizes, including the Directing Award and the Festival Favorite Award.