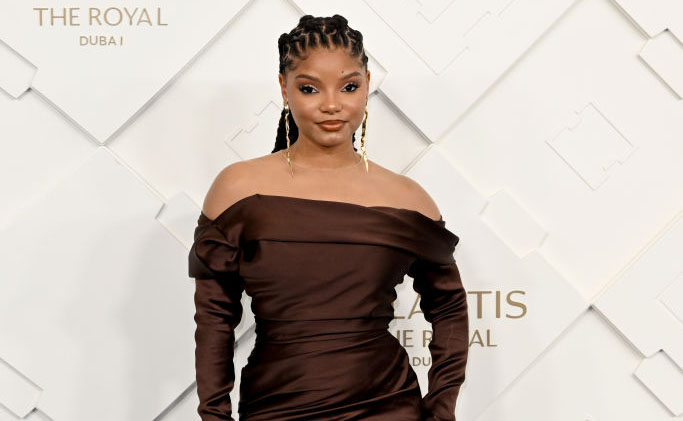 Halle Bailey made a chic arrival to the Atlantis The Royal hotel’s “Grand Reveal Weekend” celebration in Dubai, United Arab Emirates, on Saturday. The hotel’s opening included a coveted performance by Beyoncé.

Bailey arrived in a Nicolas Jebran gown, which featured an off-the-shoulder design and a mermaid-style fit. The gown had an overlap border around her shoulders, overtop a flesh colored mesh neckline. The back of the gown featured a dramatic slit from the bottom of her torso to her feet, bordered in velvet-like material. Bailey wore a pair of tan pointy-toe heels, and worked with stylist Nichole Goodman for the outfit.

Bailey’s locs were styled braided back. She wore a pair of gold dainty earrings that graced her shoulders. For makeup, she opted for a dramatic look that highlighted her mahogany dress, with nude eye shadow, sharp black eyeliner and a glossy brown lip. Accompanying Bailey to the opening was her boyfriend, rapper and content creator DDG, who went boxy with an oversize black suit jacket and matching pants.

The couple joined a roster of other A-list guests, including Bailey’s sister, Chloe, Kendall Jenner, Liam Payne, Letitia Wright and Nia Long. The night included a wowing performance by Beyoncé, who provided an hourlong, intimate show. She looked to Atelier Zuhra, Nicolas Jebran and Frolov for her outfits.

2023 has already proven itself to be a big year for Bailey. The singer, who is one half of the duo Chloe x Halle, is gearing up to star as Ariel in Disney’s live-action remake of “The Little Mermaid,” premiering May 26.