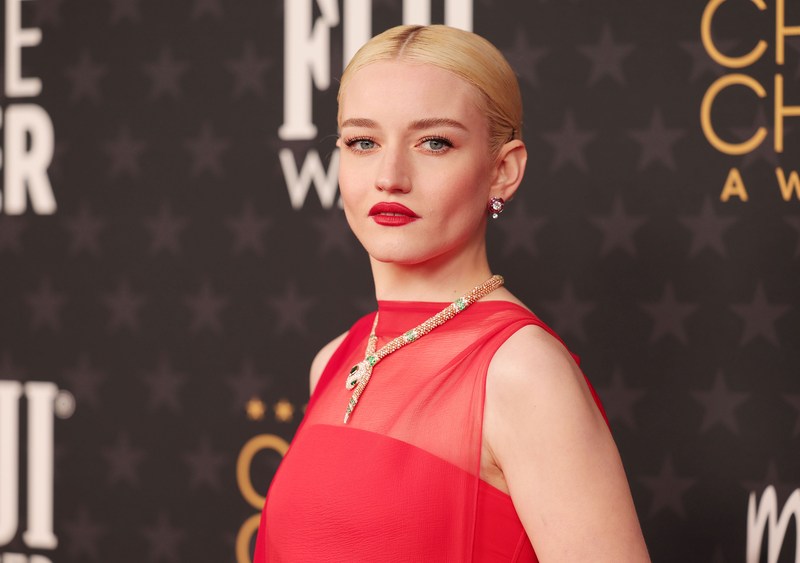 Julia Garner arrived on the red carpet for the 2023 Critics’ Choice Awards on Sunday in Los Angeles wearing a dress in a bold color choice.

In honor of this year’s event, the actress wore a high-low red dress with a sheer bodice from Ferragamo’s pre-fall 2023 collection, a matching red bandeau from Skims, a diamond necklace and diamond rings from Bulgari and red platform open-toe strappy heels from Stuart Weitzman.

Ferragamo’s pre-fall 2023 collection was designed by creative director Maximilian Davis, who took over the helm of the brand in 2022. The pre-fall collection drew inspiration from multiple references, including a Mark Rothko painting for the color palette to Nancy Holt’s Sun Tunnels installations for geometric motifs on leather pieces.

Garner worked with stylist Elizabeth Saltzman, her go-to stylist who has dressed her brands, ranging from Gucci to Prada. Saltzman also works with Sandra Oh, Jodie Comer and Madeline Brewer.

For makeup, Garner had a bold red lip, blush, light red eye shadow and eye-popping mascara. For hair, she worked with Bobby Eliot, who parted it down the center and slicked it back.