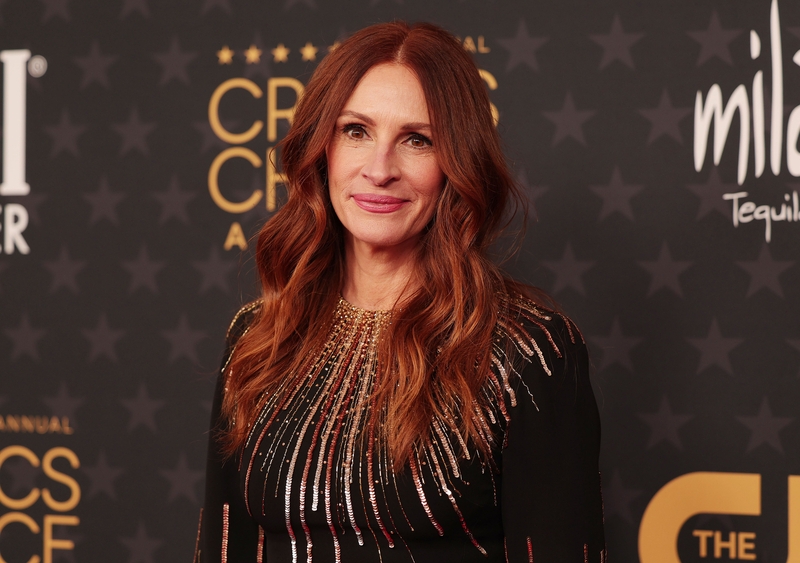 Julia Roberts arrived on the red carpet for the 2023 Critics’ Choice Awards in Los Angeles on Sunday, wearing a sparkling dress.

In honor of this year’s awards ceremony, the actress wore a long-sleeve black dress with embroidery on the sleeves and bodice from Schiaparelli. She accessorized the look with two white gold and diamond rings and dangling diamond earrings from Chopard.

In 2021, Roberts became an “ambassadress” for Chopard jewelry, starring in the brand’s Happy Sport campaign.

“Wearing a truly exquisite piece of jewelry to an event always ups the ante. It takes the glamour factor to the next level,” Roberts told WWD.

To create her look for the event, Roberts worked with her go-to celebrity stylist Elizabeth Stewart. Stewart has dressed Roberts in designers including Moschino, Thom Browne and Gucci. Stewart also works with Viola Davis, Cate Blanchett and Jessica Chastain.

For makeup, Roberts worked with Genevieve Herr for an elevated natural look featuring a matte pink lip, blush, mascara and smoky eye shadow. Hairstylist Serge Normant gave her a part down the center with voluminous waves.

The latter half of 2022 was busy for Roberts. She costarred alongside George Clooney in the romantic comedy, “Ticket to Paradise,” where they played divorced parents trying to talk their daughter out of getting married.

At this year’s Critics’ Choice Awards, Roberts was nominated for Best Actress in a Limited Series or Movie Made for Television for her role in the Starz political thriller “Gaslit.” The series focused on the Watergate scandal that implicated former president Richard Nixon.