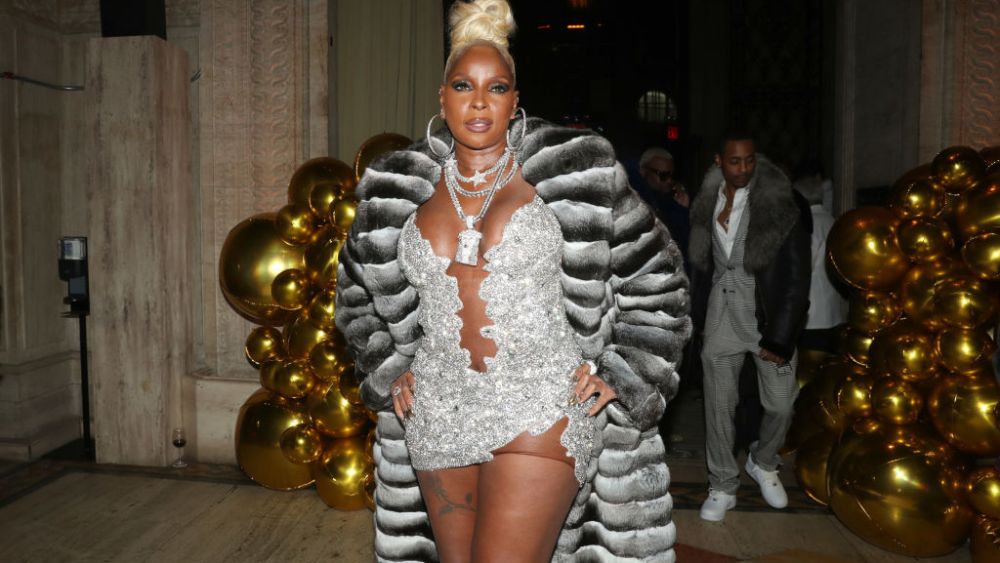 In honor of her birthday celebration, the Grammy-winning R&B singer wore a sparkling silver sequin minidress with a plunging neckline custom designed by Matthew Reisman paired with a statement floor-length custom chinchilla coat from Konstantine Furs. Blige coordinated the look with strappy-heeled open-toe sandals from René Caovilla and earrings by Lorraine Schwartz and silver statement chains from Pristine Jewelers.

To create her look for the evening, Blige worked with stylist Mauricia Henry. Henry has been a longtime collaborator with Blige, dressing her in brands including Roberto Cavalli, Louis Vuitton, Tom Ford and Balmain.

For makeup, Blige worked with makeup artist Merrell Hollis to create a dramatic evening look featuring a nude glossy lip, dramatic eyelashes, heavy black eyeliner and shimmering smoky eye shadow. For hair, she worked with Tym Wallace, who gave her a tight updo with her blond hair pinned into an intricate bun on top of her head.

Mary J. Blige first stepped onto the music scene in the late ’80s, and her career took off in the ‘90s with a series of hit songs, including “I’m Goin’ Down,” “Not Gon’ Cry” and “Sweet Thing.”

Some of her celebrity friends attending her birthday bash at Cipriani this year were rapper Fat Joe, actress and singer Queen Latifah, singer Usher and stylist Misa Hylton.

Outside of music, Blige also announced the pending release of her first children’s book, “Mary Can!” which will be available on March 28.