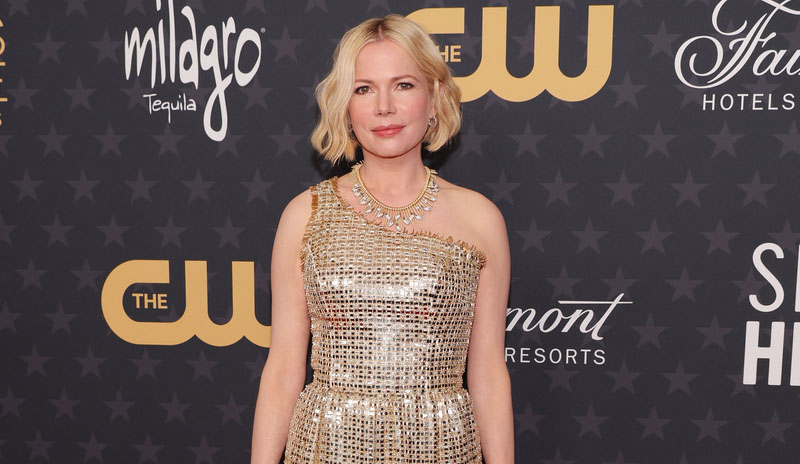 Michelle Williams made a sparkling arrival to the 2023 Critics Choice Awards in Los Angeles on Sunday. To the red carpet, Williams wore a gold-colored sequined gown.

The one-shouldered dress was adorned in uniform sequins form head to toe, mirroring a dazzling physical award. It had slight fringe detailing on the top of her chest and along her shoulder hemline. The gown created a pool-like train around her feet.

Her accessories included a statement oversized ring and a shimmering, bold gold colored necklace that coordinated with her gown.

For hair, Williams wore her signature blond tresses in a short bob cut, with her wavy hair framing her face.

The award show is a big night for Williams as she has been nominated for Best Actress for her role in the “The Fablemans.”

The film also stars Julia Butters, Seth Rogen and Paul Dano. Williams walked the stage at the 2023 Golden Globe Award Ceremony on Jan. 10 with her “Fabelmans” cast members wearing a Gucci gown and silver platform sandals. She also received a nomination at the Golden Globes for Best Performance by an Actress in a Motion Picture — Drama category. For “The Fabelmans” premiere at the AFI Film Festival on Nov. 6, she donned a strapless Celine evening dress.

The 2023 Critics’ Choice Awards recognized excellence in film and television on Sunday in Los Angeles. Chelsea Handler served as the show’s host. Some of this year’s nominees include Steven Spielberg, Austin Butler, Cate Blanchett, Angela Bassett and Zendaya.