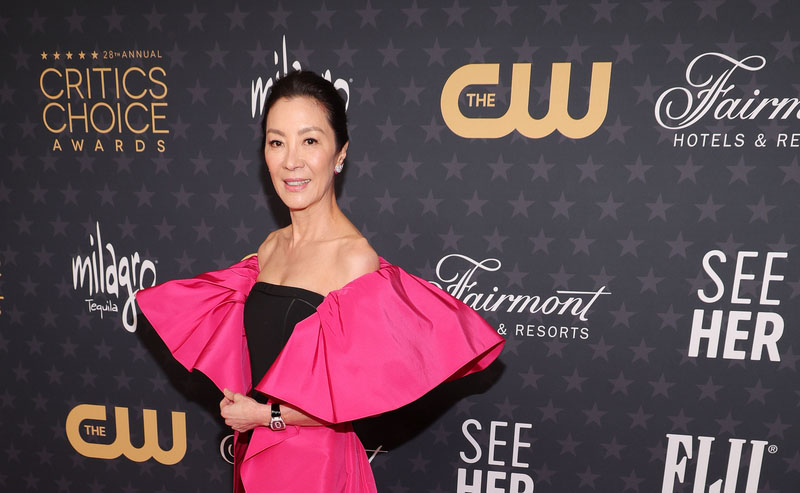 Michelle Yeoh arrived on the red carpet for the 2023 Critics’ Choice Awards on Sunday in Los Angeles wearing a statement-making gown.

In honor of this year’s awards ceremony, Yeoh donned a form-fitting black dress with voluminous pink sleeves that cascaded into a large pink train designed by Carolina Herrera.

She coordinated the look with black Jimmy Choo Anouk pumps and accessorized with diamond earrings and a platinum diamond ring from De Beers.

For makeup, Yeoh went for a subtle look, with a pink lip, light blush and eye-popping mascara. She had her hair pinned to the back in a tight updo.

Yeoh is nominated at this year’s Critics’ Choice Awards for Best Actress for her role “Everything Everywhere All at Once.” Yeoh recently won the Golden Globe Award for best actress in a motion picture — musical or comedy for the film. For the occasion, Yeoh wore a sequin blue Armani Privé gown. It was the first Golden Globe win for the actress.

Earlier this month, the actress kicked off awards season with a dinner hosted by W and Louis Vuitton. For the event, Yeoh wore a full Louis Vuitton look, including a gold trench coat. She was joined at the dinner by fellow actresses like Michelle Williams and Cate Blanchett, who are also contenders for acting awards this season.