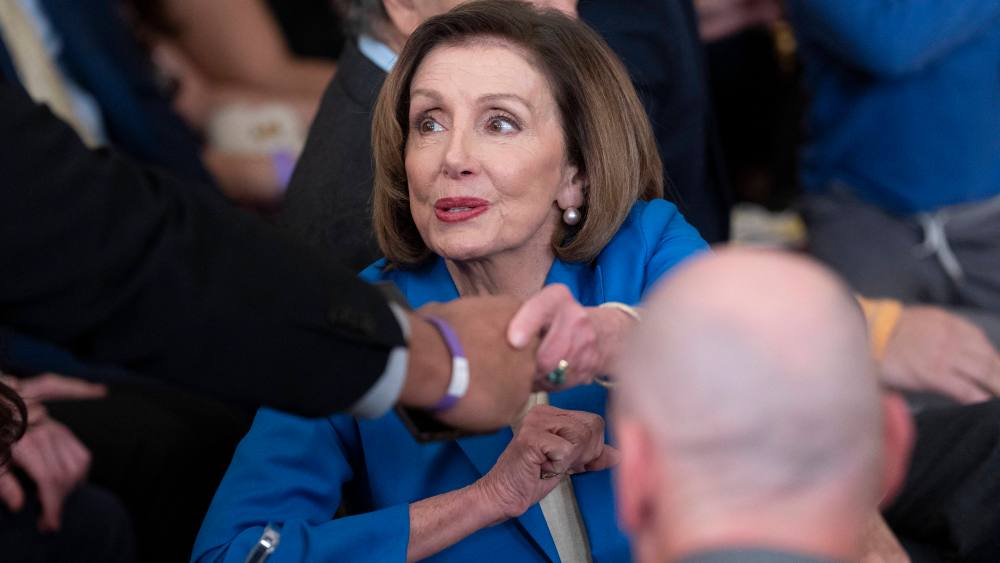 Nancy Pelosi joined her fellow politicians at The White House on Tuesday to welcome The Golden State Warriors.

For the occasion acknowledging the San Francisco-based NBA team, the California Congresswoman and former Speaker of the House (who represents the 11th congressional district in San Francisco) wore a royal blue peak lapel pants suit with a beige crewneck undershirt. To accessorize the look, Pelosi wore one of her signature pearl necklaces with matching pearl statement earrings. American flag and Ukraine flag pins adorned her left lapel.

President Joe Biden welcomed the team wearing a navy blue suit, light blue shirt and blue and yellow striped tie. In true presidential fashion, he had his American flag pin on his lapel.

The blue and yellow palettes were apt choices as the Golden State Warriors share the same colors.

In 2022, Pelosi decided not to pursue a leadership position within the Democratic caucus after having served as Speaker of the House for a second time between 2019 and 2023 until the new session of Congress started on Jan. 3. Pelosi was previously Speaker of the House from 2007 to 2011 serving under President George W. Bush first, and later Barack Obama during the first two years of his first presidential term.

The Congresswoman has broken many glass ceilings throughout her storied political career. Upon her selection as Speaker of the House in 2007, she became the highest-ranking woman in the history of American politics until Vice President Kamala Harris was sworn in at the January 2021 presidential inauguration.

Before their win against the Wizards, the Golden State Warriors had a quick meeting and photo op with former president Barack Obama. To date, they have won five championships, including one in 2017 and 2018. In 2017, the team’s starting point guard, Curry, said in a press conference that he wouldn’t attend a meeting with then-President Donald Trump. Trump then publicly revoked the team’s invitation.