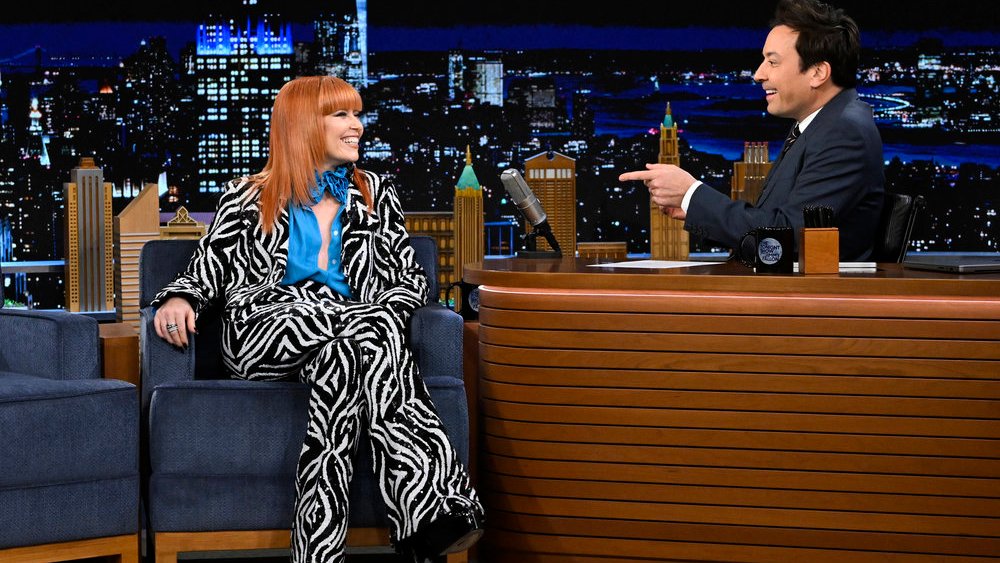 Lyonne’s ensemble consisted of a black-and-white, zebra-sequin blazer with sharp lapels and a pair of matching trousers with a boot-cut flare. According to the brand, the suit is comprised of reclaimed zebra sequin. Underneath her suit jacket she wore a slightly unbuttoned cobalt blue blouse with ruffled detailing on the collar. For her bold look, Lyonne worked with stylists Bridget Blacksten and Cristina Ehrlich.

When it came to hair, Lyonne channeled a ’70s look, wearing her ginger-colored tresses with frayed-cut ends and a straight bang. Her accessories included a few stacked midi-rings and a pair of medium-sized silver hoop earrings. For makeup, she opted for brown hues, with smokey brown eyeshadow, dark blush and a matte brown lip.

While on the show, Lyonne talked to Fallon about reinventing her personality, hosting “Saturday Night Live” and her upcoming show, “Poker Face.”

As for reinventing her personality, the actress told Fallon she picked up a new hobby.

“You know, in a new year, you want to reflect. You want to consider, ‘Who am I?’ I decided — I thought — I think my whole personality was bad. You know what I mean? What am I doing with the New York and the cigarettes? Enough. So I became a surfer,” she told Fallon on the show.

“Well, I Googled ‘midlife crisis.’ So I thought, ‘I think I’ll take this one.’ You know, make me, like, a Buddhist or something. ‘I’m too into quantum physics, I should be more into nature,’ I said to myself. I get up all the time. I know I don’t seem it, but I’m quite spry and I go out there. I’m out there,” she said, after Fallon asked how she got into her surprisingly new pastime.

Lyonne is gearing up to star in the Peacock series “Poker Face,” which comes to the streaming platform this month. In the series, which also stars Adrien Brody, Benjamin Bratt and Chloë Sevigny, Lyonne plays Charlie Cale, a woman who possesses the ability to know when someone is lying. Created by Rian Johnson, the director and writer of the “Knives Out” movie sequels, “Poker Face” debuts Thursday.