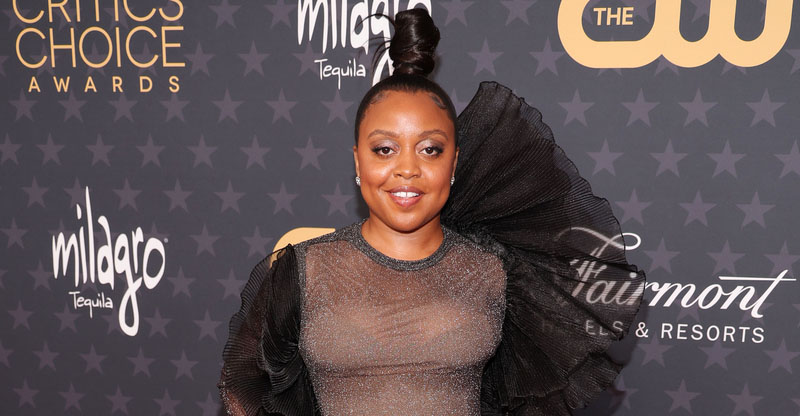 Quinta Brunson embraced a dark-toned look for her arrival to the 2023 Critics’ Choice Awards on Sunday in Los Angeles. To the red carpet, Brunson wore Robert Wun from the brand’s spring 2023 collection.

Brunson‘s gown was adorned in black tulle-like detail on her collar, sleeves, train and bodice. It had sheer, sparkly material around her torso and skirt. The gown was formfitting and had a mermaid-style fit.

She worked with her longtime stylist Byron Javar, who has outfitted Marsai Martin, Karrueche and the rap duo City Girls.

Brunson slicked back her hair and styled it in a high top-knot bun. Her makeup included silver eye shadow, dark blush and a glossy pink lip. For her nails, Brunson had an almond shape with chrome-colored polish.

2023 has been a good year for Brunson, who was nominated in the Best Actress in a Comedy Series category. The nod recognizes her role in the ABC series “Abbott Elementary,” which also stars Sheryl Lee Ralph, Tyler James Williams and Lisa Ann Walter.

Just this month, Brunson took home a Golden Globe for Best Performance by an Actress in a Television Series, Musical or Comedy for the show. To the ceremony, she wore a Christian Siriano strapless gown with a deep pink chest and black tulle-inspired detail.