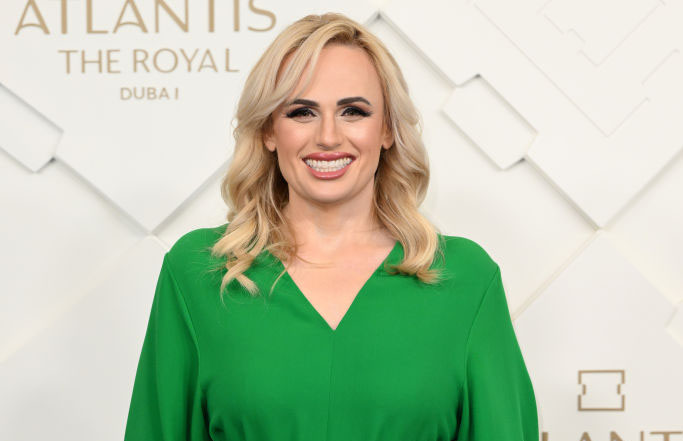 Rebel Wilson embraced a vibrant color for the Grand Reveal Weekend for Atlantis The Royal on Saturday in Dubai. Wilson looked to Valentino for her outfit, wearing a green midi dress.

The dress featured a slight V-neckline and slightly oversized sleeves, with slits on the sides. She adorned her waist with a sleek black Valentino belt, which had the fashion house’s signature monogram “V.”

Wilson toted a black shoulder bag with a chain strap and wore a statement ring. Her signature blond tresses were styled with bombshell curls and a side part. In the past, Wilson has worked with celebrity stylist Elizabeth Stewart. Stewart has outfitted Zoey Deutch, Jessica Chastain and Selma Blair.

When it came to makeup, Wilson donned a red-carpet-ready look, which included dramatic black eyeliner, a touch of pink eye shadow, rosy blush and a glossy pink lip.

A number of stars attended the coveted opening, which included a special performance by Beyoncé. Accompanying Wilson to the hotel’s opening was her girlfriend, Ramona Agruma, who went big with a gold look which included a V-neck tunic top, a jacket and straight-leg pants. Kendall Jenner, Letitia Wright, Chloe Bailey, Liam Payne and Nia Long were among the invitees at the opening.

Atlantis The Royal hotel’s “Grand Reveal Weekend” comes as the resort readies to launch bookings in February. The opening featured a major performance by Beyoncé, who gave an hour-long show. For her outfits, she looked to Atelier Zuhra, Nicolas Jebran and Frolov.

Wilson continues to make strides in the entertainment industry. Just last year, the actress starred in the “The Almond and the Seahorse,” which centered around two people who suffered from a memory loss trying to regain close relationships with the people around them.