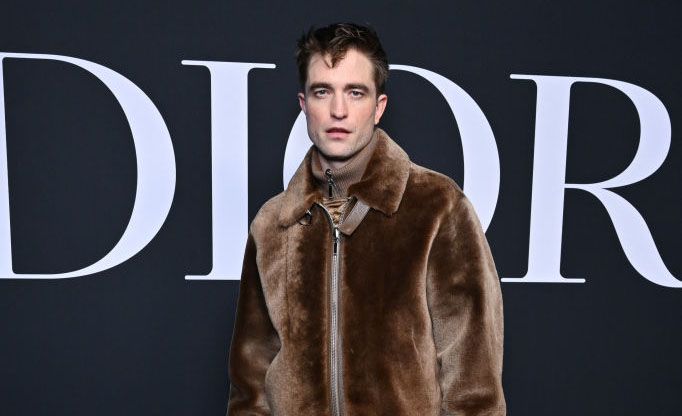 Robert Pattinson sat front row at the Dior Homme Fall 2023 Menswear Show on Friday in Paris in a blue skirt.

Pattinson also wore an oversized, textured brown jacket with a sharp lapel and an added mock zip-neck style insert. Underneath, he went for a classic route, opting for a stark white top. He coordinated his look with a pair of dramatic knee-length chunky boots, with a pronounced round toe.

Pattinson attended the fashion show with a slew of other A-listers and creatives, including Eddie Redmayne, Karlie Kloss, David Beckham, Gwendoline Christie and Naomi Campbell.

Pattinson made another standout appearance just last month at the Dior Men’s Pre-Fall 2023 Show in Egypt, where he arrived alongside his longtime partner, model Suki Waterhouse. He wore a timeless white suit with a deep green turtleneck underneath. Waterhouse wore a billowy brown gown with a matching slip-like insert underneath.

Pattinson has long been a supporter of Dior and has been the face for the Dior Homme fragrance since 2013. In October, he appeared in the fashion house’s spring menswear campaign wearing an array of tailoring and sportswear deigned by Kim Jones.

Pattinson is also gearing up for the release of his new movie “Mickey 17” slated for 2024. The sci-fi film is written, directed and coproduced by Bong Joon-ho. It’s based on the book “Mickey7” by Edward Ashton and also stars Naomi Ackie, Steven Yeun and Mark Ruffalo.

Paris Men’s Fashion Week runs from Jan. 17 to Jan. 22. Designers and brands on this season’s schedule include Givenchy, Issey Miyake, Yohji Yamamoto, Dior, Louis Vuitton, Rick Owens and Paul Smith. All this season’s runway shows and presentations are in person.