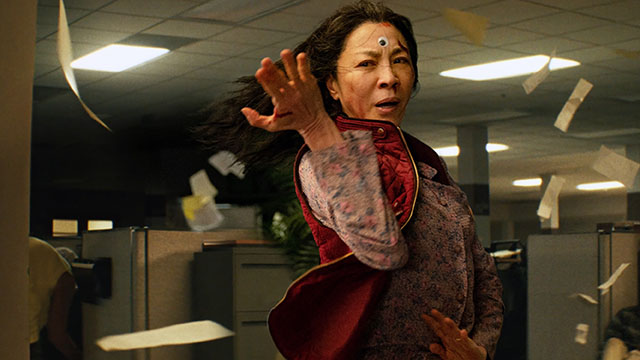 “Everything Everywhere All at Once” came out on top during the announcement for this year’s Oscar nominations Tuesday morning. The movie received a total of 11 Academy Awards, making it the most-nominated movie this year.

Of the film’s many nominations, one of them was in the Best Costume Design category. The movie was costumed by Los Angeles-based stylist Shirley Kurata, whose work is known for its abundance of patterns and colors. Kurata has styled campaigns for Westfield, Volkswagen, Clinique, Target and Oliver Peoples. Kurata is nominated in the category alongside Mary Zophres for “Babylon,” Ruth E. Carter for “Black Panther: Wakanda Forever,” Catherine Martin for “Elvis,” and Jenny Bevan for “Mrs. Harris Goes to Paris.”

For “Everything Everywhere All at Once,” Kurata had the challenge of costuming a film through multiple decades and literal dimensions. “Everything Everywhere All at Once” is a sci-fi adventure film that tells the story of a hero with newfound powers who must fight the dangers of the multiverse as an interdimensional rupture unravels reality. From start to finish, the costumes don’t disappoint.

One of the most standout fashion moments in the film is when Michelle Yeoh (who is nominated for Best Leading Actress for the movie) dons a wedding gown with a voluminous tulle skirt and a beaded bodice with lace sleeve detailing.

Jamie Lee Curtis plays IRS inspector Deirdre Beaubeirdre, who appears in various other universes. One of Deirdre’s most memorable looks in the film is a mustard turtleneck, yellow cardigan, gold chains and red eyeglasses that distinctly say IRS employee in the most colorful way.

One of the most highly circulated images from the film was Michelle Yeoh in fighting mode as she prepared to go to table in a floral shirt and red quilted jacket. The shirt is reminiscent of a Liberty fabric, which are virtually timeless with the company dating back to 1875 and still operating to this day.

Stephanie Hsu, who is nominated for Best Supporting Actress for the film, stood out in a scene where she wore a costume seemingly inspired by the king of rock ‘n’ roll, Elvis Presley. The white jumpsuit Hsu wore came with all the embellishments Elvis was renowned for during his lifetime.

From colorful leggings to cold-shoulder tops, the style of various decades shined through this film. The ’80s inspiration came through with this workout-inspired outfit. During the ’80s jazzercise was a huge trend, and many people had the workout gear to go with it.

The 2023 Oscars ceremony is scheduled for Mar. 12 in Los Angeles. Comedian and talk show host Jimmy Kimmel will host this year’s program. Kimmel returns as host, having previously hosted the 2017 and 2018 Academy Awards. ABC will televise the ceremony in the United States. Some of the frontrunners at this year’s ceremony include Brendan Fraser for Best Leading Actor, Cate Blanchett for Best Leading Actress, Angela Bassett for Best Supporting Actress and Ke Huy Quan for Best Supporting Actor.