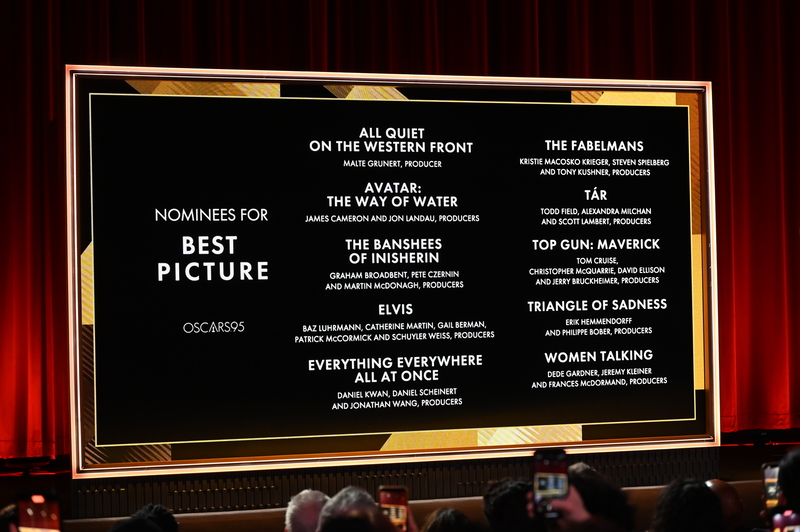 On Tuesday morning, the 2023 Oscar nominations were announced. Actress Allison Williams and actor Riz Ahmed joined each other in revealing the distinguished list of nominees in Los Angeles.

“Everything Everywhere All at Once” led the field this year for most nominations with 11 nods. Trailing the film just slightly in nominations were “All Quiet on the Western Front” and “The Banshees of Inisherin” with nine nominations.

With the official list of Best Picture nominations out, some are wondering how they can watch all the category nominees before the ceremony in March. Many streaming platforms offer free trial subscriptions for those who do not already have memberships.

Here, a roundup on how to watch this year’s Best Picture nominees.

“All Quiet on the Western Front”

How to watch: Netflix

The Edward Berger directed anti-war film based on the novel of the same name was released last year on Oct. 28 and is now available for streaming. The film stars Daniel Brühl, Felix Kammerer and Albrecht Schuch.

“Avatar: The Way of Water”

How to watch: In theaters

“The Banshees of Inisherin”

How to watch: HBO Max

This comedy-drama film stars Colin Farrell, Brendan Gleeson, Kerry Condon and Barry Keoghan and is still playing in select theaters. If you want to make an at-home movie night of it, though, it’s available via HBO Max. Farrell, Condon and Keoghan all received acting nominations for the film.

“Everything Everywhere All at Once”

How to watch: Paramount+

The sci-fi adventure film starring Michelle Yeoh has brought the actress many accolades, including the Golden Globe for Best Actress Motion Picture — Comedy or Musical. Ke Huy Quan is also considered a frontrunner for Best Supporting Actor at the Oscars.

How to watch: Various platforms

This coming-of-age film was directed by famed director Steven Spielberg and cowritten and coproduced with Tony-winning playwright Tony Kushner. The film is a semi-autobiographical story about Spielberg’s youth and stars Michelle Williams. It’s available to purchase for digital viewing on Prime Video, Vudu and Google Play Movie.

How to watch: Stream on Peacock starting on Friday

Cate Blanchett stars in this psychological drama. Blanchett is considered by some critics as the frontrunner to win the award for her role as fictional composer Lydia Tár.

How to watch: Paramount+

How to watch: Prime Video

This satirical black comedy film written and directed by Ruben Östlund for his English-language film debut is a commentary on wealth and classism. A cruise ship for the ultra-wealthy sinks and they are now trapped on an island and must figure out how to survive.

How to watch: In theaters

“Women Talking” is based on a true story and a novel written by author Miriam Toews about women in an isolated religious colony reconciling their faith with a series of sexual assaults. The film stars Rooney Mara, Claire Foy and Frances McDormand.

The 2023 Oscars ceremony is scheduled for March 12 in Los Angeles. Comedian Jimmy Kimmel will host this year’s program after stints in 2018 and 2017. ABC will televise the ceremony in the United States. Some of the frontrunners include Brendan Fraser for Best Leading Actor, Cate Blanchett for Best Leading Actress, Angela Bassett for Best Supporting Actress and Ke Huy Quan for Best Supporting Actor.