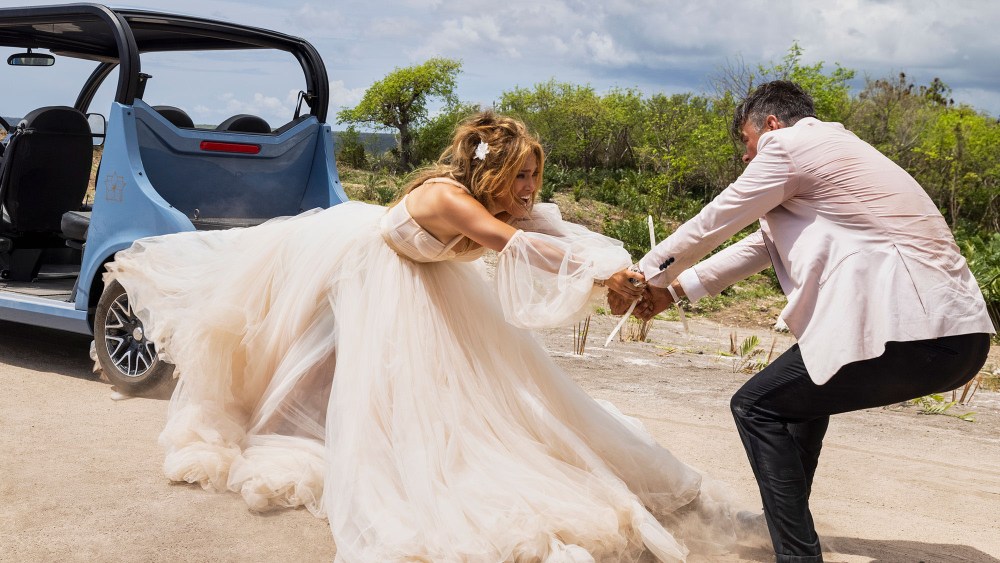 Jennifer Lopez’s new movie “Shotgun Wedding” will be released on Prime Video on Jan. 27. The film has a star-studded cast, including Lopez, Josh Duhamel, Jennifer Coolidge, Lenny Kravitz and Cheech Marin — but the real scene stealer in the film is a wedding dress.

“Shotgun Wedding” tells the story of a couple on a seemingly picture-perfect destination wedding that is going great until it takes a turn for the worse when their entire wedding party is taken hostage.

The story turns from a seemingly classic rom-com setting to an action movie, and the dress goes along for the ride as well.

In order to have enough dresses for the film, Travers and Lahav worked to meticulously create 28 copies in just one month using techniques and fabrics so the gown could be modified, ripped and transformed to work for an action movie. In total, 35 garments were made so there were spares for the stunt doubles.

The dress serves as Lopez’s one signature outfit throughout the entire movie — most of her costume changes involve different versions of the garment.

Travers had worked with Lopez previously for the 2019 film “Hustlers.” He said he was thrilled to discover Galia Lahav because the brand understood the challenge of costuming the film. The concept for the design is that it’s the perfect dress for a perfect wedding — but not Lopez isn’t starring as the perfect bride.

Galia Lahav’s process began with sketching a variety of dresses while details of the film were still under wraps. When he learned “Shotgun Wedding” was an action movie, Travers realized the dress would be ruined, so he wanted to create a dress that was timeless and modern.

The designer’s process for creating this dress began while there were still strict COVID-19 lockdowns. With the brand already under pressure with shipping deadlines and supply chain issues, in order to create the numerous dress duplicates needed for the film, it had to nearly shut down the studio, and workers worked late into the night for a month, until all dresses were completed.

Once the dresses were done, it was time to figure out how to ruin them.

“We had to ruin a few dresses ourselves to find the right way of doing it in a way that would seem natural and not too artificial,” Sever said. “My studio manager came up with the idea of sewing everything by hand to create a stitch that would hide when you pull on it. Everything had to be sewn by hand because no machine could support creating that kind of stitch. It was a lot of trial error to create this stitch that’s unique to us.”

To create the deconstructed look of the dresses, Travers worked with a team of artists he found in the Dominican Republic, where the film was shot, led by Carroll Maura. Maura helped create everything from the blood splattering to the slashes on the dresses.

“When you’re tasked with doing a wedding dress for a film, you need to be aware of the great dresses that came before it,” Travers said. “You look at Priscilla Presley’s, you look at Princess Diana’s, you look at everyone to see what works. This is an action film, so much of what we could work with were dictated by the needs of the dress. Jennifer needed the ability to run, climb and zip-line in this dress.”

Costuming action films was nothing new to Travers (he worked on “The Amazing Spider-Man 2”), but creating a wedding dress for an action move is virtually unprecedented. His goal in creating the costume was to have the audience think there was only one dress being worn the whole time.

While Sever and Galia Lahav have costumed operas and provided dresses for pageants before, this was the first time they embarked on an undertaking of this scale.

“We like to treat every bride and every client like they are a star on the level of Jennifer Lopez, but this time we actually had to dress Jennifer Lopez, who is an icon,” Sever said. “We had to go above and beyond anything we’ve done before. When I first heard that this dress would be for J. Lo and a movie about [a] wedding, it was a dream come true.”

Throughout the action-packed scenes in the film, the dress is continuously stripped away at until it becomes something more fitting for her character — symbolizing peeling back the layers of her growth and relationship.

Travers also took his share of liberties when it came to dressing characters played by Lenny Kravitz and Jennifer Coolidge.

“Lenny’s character arrives via helicopter, so I had to make sure his look was equally obnoxious,” Travers said. “I thought to myself what is the most annoying thing you could wear to someone’s wedding and decided on skinny jeans. We decided he wouldn’t wear a shirt under the blazer. When I was going to his fitting, I had Jennifer Coolidge’s rack, which had pearls, and I decided they were for his character now and Lenny loved it. This was before men and pearls was a big trend like now, since we shot this in 2020.”

For Jennifer Coolidge, her character was scripted as being someone who dreams big of being in Hollywood but is a community theatre actress at best. However, Travers wanted her wardrobe to reflect someone who made it big and was very over-the-top.

“For Coolidge, we designed this person who doesn’t edit down and isn’t able to pull back,” Travers said. “She’s got her plane ticket, she’s going to this destination wedding and she’s going to deliver that type of look.”

Most of the cast of the film spends their time shooting in a giant pool, which required Travers to have multiples of everything given the water damage the clothes would go through.

“It was a huge under taking to deal with all these wet clothes for weeks on end,” Travers said. “There were eight- to 10-hour shooting days with everyone in the pool under the sun. You want the audience to take this ride with you thinking there is only one of everything for the clothes, but there was really seven of every garment. Everything had to be flown down to the Dominican Republic and all the fittings had to be done there as well.”

“Shotgun Wedding” was produced by Lionsgate. The film was directed by Jason Moore.