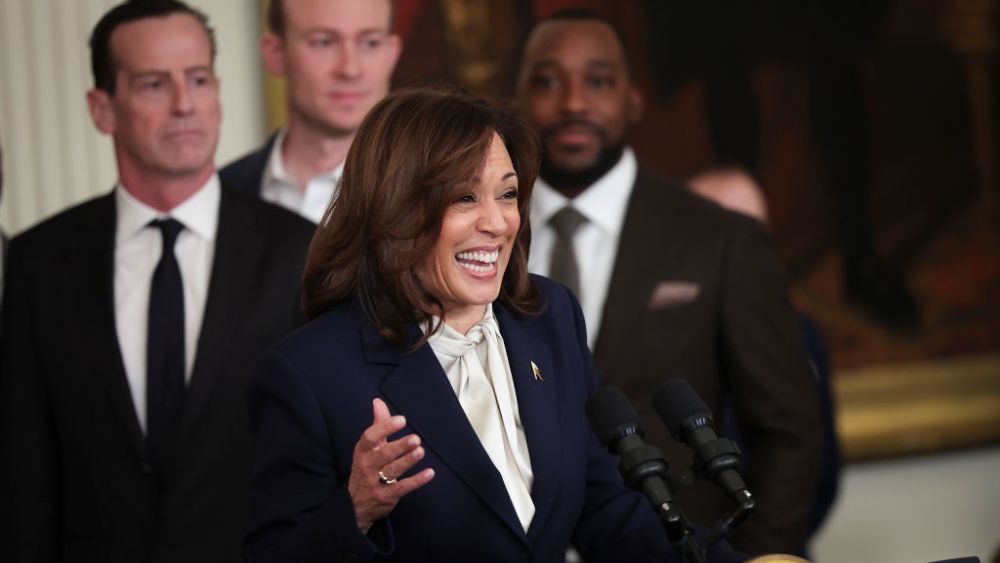 Kamala Harris is putting her game face on.

The details of her chic suit included a structured lapel-collared blazer and a matching pair of straight-leg pants. Underneath she wore a white, pussybow blouse with a Portofino like tie adornment in the center of her neck. When it came to hair, Harris embraced her signature fresh-blowout look, with a slight swoop, frayed side bang. Her accessories included a few official pins and some rings.

Harris joined President Biden for the White House visit, posing with the team and holding her own Golden State Warriors jersey, which she was gifted from Steph Curry and the rest of the team. Her last name and the number “1” was printed on the back of it, representing her as the first woman vice president of the U.S. Biden had a special jersey, too, with the number “46” printed on the back.

There was a lighthearted moment where Harris humorously declined to stand on one knee to take a picture with the team, after Biden playfully urged her to. She instead stood in between Curry and the other team members to pose for the shot. The team visited the White House to celebrate its 2022 NBA championship.

Before their big game against the Wizards, the team also had a quick meeting and photo op with former President Barack Obama. The Warriors have won five championships overall. In 2017, the team’s starting point guard, Curry, said in a press conference that he wouldn’t attend a meeting with then-President Donald Trump. Trump then publicly revoked the team’s invitation.

Harris has a special affinity for the team, having been born in Oakland, California, which is where the Warriors played for years. She also served as San Francisco’s District Attorney before going on to becoming California’s attorney general and then being elected senator representing California in 2017 before being chosen as Biden’s running mate in 2020.