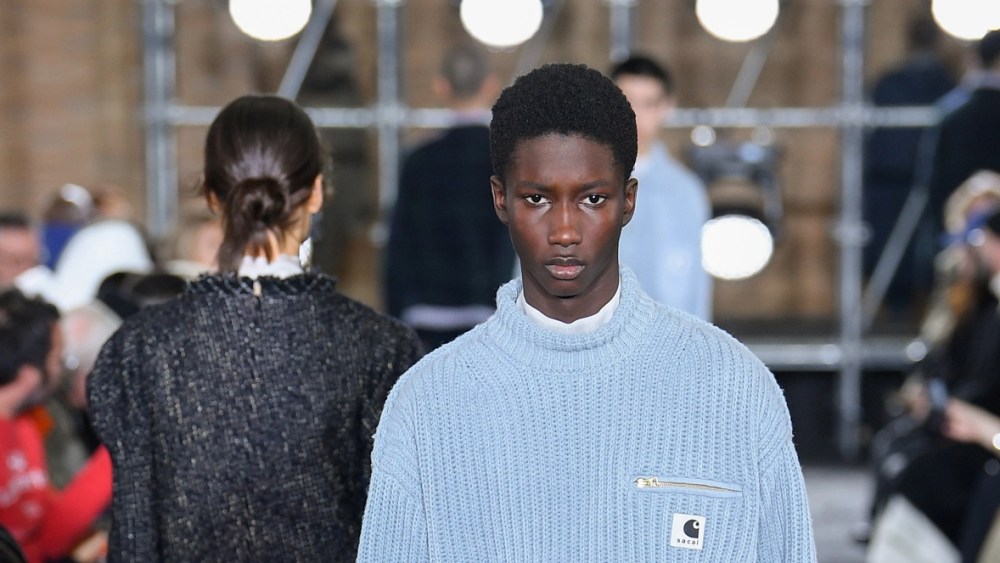 Carhartt has again been given the high-fashion treatment, this time by Sacai. Sacai’s latest collection by Chitose Abe, which debuted during Paris Men’s Fashion Week on Sunday, revealed not only the brand’s upcoming fall 2023 menswear and women’s pre-fall 2023 offerings but also Abe’s reimagining of Carhartt’s classic utilitarian workwear.

The WIP line included Carhartt’s signature multipocket chore jacket in various iterations and luxury fabrications, such as a gold-buttoned black shearling. Another parka featured an olive green base with a tan shell, black buttons and soft shearling.

Sacai’s knitwear was also reimagined for the collaboration, featuring ribbed high-neck sweaters with zipped breast pockets in shades of blue, as well as four-pocket knit cardigans as a take on Carhartt’s chore jackets. The release date has not been disclosed.

Sacai is no stranger to collaborations, and nor is Carhartt. In the past, Carhartt has collaborated with Marni, New Balance and Suicoke while Sacai regularly works with Nike. Notably, Abe also collaborated with Jean Paul Gaultier for the Gaultier Paris Sacai Couture collection for fall 2021.

After Gaultier retired in 2020, he promised to keep his haute couture business going with a revolving cast of guest designers. Abe was chosen as the first designer, but there was a yearlong delay in revealing her collection due to the coronavirus pandemic.

Abe told WWD that while she was relieved to finally debut the collection, she was grateful for the extra time to work on it. “It’s a blessing in disguise in some ways,” the Japanese designer said via a translator. “I’m really very happy with the results. I wanted the collection to be a real synergy between the two brands.”

At Sunday’s runway show, Sacai also revealed its newest collaboration with Nike: the Magmascape sneakers, a take on the sportswear brand’s Footscape style.