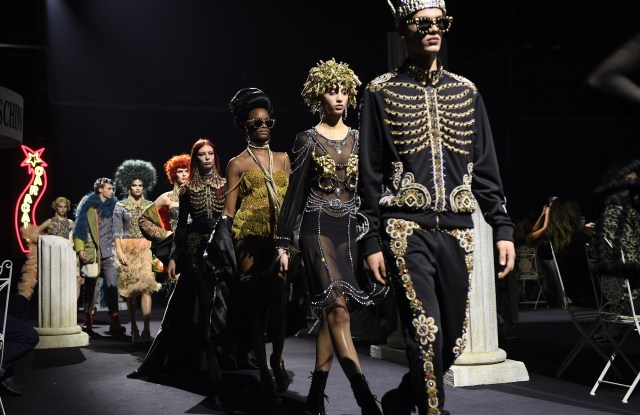 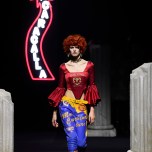 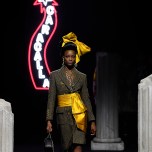 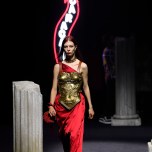 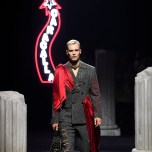 A show in Rome in the middle of the Pitti Uomo trade show? Nothing is too crazy for Jeremy Scott. And actually the Moschino runway show, held at the legendary Roman Cinecittà movie studios, didn’t disappoint those who were asked to leave Florence and head south for just a few hours. If there is a designer who knows how to have fun and entertain his guests, that person is definitely Scott, who celebrated film director Federico Fellini with an event filled with references to his most iconic movies.

The ruins of the Baths of Caracalla were reproduced in the venue, where the multigenerational casting of female and male models walked around dining tables, as well as replicas of oversize stone torches and columns. Antique Roman elements, creatures from the Latin world, as well as characters stolen from the 18th-century Venetian courts portrayed in the “Casanova” movie were all juxtaposed in the show, which unveiled the Moschino men’s fall 2019 and women’s pre-fall 2019 collections.

The multifaceted Italian inspiration was reflected in the sartorial quality of herringbone coats and bombers embroidered with Latin wording, while the Old Roman iconography echoed in the overall prints splashed on urban trucker jackets matched with coordinated pants, as well as feminine draped dresses. A gladiator corset was layered over fluid silk dresses and 3-D Medusa embellishments decorated a see-through frock. Girls sporting maxi wigs and duchesse dresses with exaggerated silhouettes and a cascade of ruffles looked like opera stars, while the surreal bourgeois craziness of Fellini’s classic movie “8 1/2” was reflected in the sensual dresses enriched with feathers, sometimes worn with urban and contemporary parkas. “I imagined these divas leaving the set for a while and getting warmer backstage in their outerwear,” Scott explained backstage. A royal mood permeated some of the masculine looks, including the tuxedos accessorized with multicolor chains and crowns for very glamorous disco emperors.

The standout collection showed Scott’s creative fantasy running wild. And the Fellini-esque touches only added to the fun.