For his first December Collection 2 show, Alexander Wang brought forth new twists on uptown and downtown sartorial classics inspired by the designer's take on the American hustle. 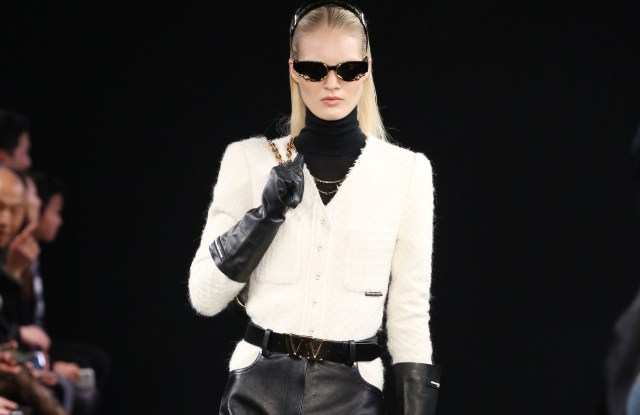 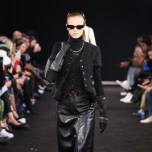 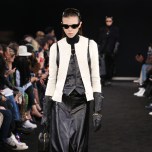 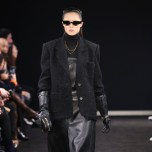 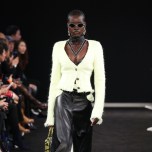 Alexander Wang summoned the fashion flock to the former Williamsburgh Savings Bank Tower in Brooklyn and dedicated his Collection 2 to the American hustler, referencing Carolyn Bessette-Kennedy and Foxy Brown. “Two women that probably wouldn’t be put side by side, but I felt they had an incredible parallel,” Wang said after the show on Saturday night, explaining both were born in New York to middle-class families and hustled to achieve what they wanted in life — all the while strongly representing the stereotypical uptown/downtown divide. Wang twisted and warped “codes of privilege and wealth, and class and status symbols” to give each exit his cool-girl sensibility. The strongest included tweed jackets with leather butcher’s aprons and chain bracelets worn over rubber gloves; a long, houndstooth topcoat with drone-painted smiley face graffiti by artist Katsu, and evening looks reworked with white T-shirts or men’s blazers cut generously to hang loose like sweatshirts.

Wang also winked to his time at boarding school — the result of his parents’ hustle — into some great preppy moments. There were polos constructed entirely of colored safety pins and styled under slouchy ribbed sweaters with long, leather skirts or oversize rugby shirts with studded crests and pinstriped boxer shorts. Eighties nostalgia came through in tennis-inspired “PA!N” graphics on seersucker polos while towel hair-wraps and garment bags, ranging from satin to leopard spotted, exaggerated his woman’s work-hard-play-hard, on-the-go lifestyle.

While Wang remains one of few New York designers showing fall during the new December fashion week, he said the brand exceeded sales projections from its June show, the first under the new earlier cadence. And so he went all in for Collection 2, adding in his T collection, accessories and sartorial men’s wear, along with a caviar and Champagne reception to boot.