Casey Cadwallader continued his exploration of sculptural tailoring, without forgetting to have a bit of fun. 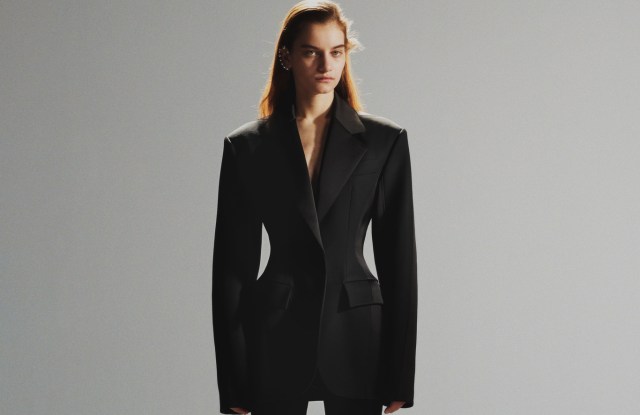 Casey Cadwallader is intent on dressing everyone. For pre-fall 2019, his collection for Mugler experimented with all sorts of stretch technologies to adapt the garment to the body and its fluctuations. “Thierry Mugler was really into corsets and different devices to make women look curvier,” said the designer, speaking from the Mugler atelier in Paris. “With new fabric technology, you can play with that even more.”

Case in point: an innocent looking black bustier, which — once you took a second look — revealed a layer of white jersey bonded inside of it, pressing the garment to the body when worn. A dress made of scuba jersey was adorned with stretch panels on the outside. When tried on by the model for the look book, it made her stand a little straighter and underlined the curve of her waist while remaining comfortable, recounted Cadwallader.

The collection also featured beautiful examples of sculptural tailoring, evolving from the house’s exaggerated shoulders to something just as striking, but more modern. “Women, in general, are more at ease with their own power today, but it’s a more personal power instead of external validation,” mused Cadwallader. A stunning black grain de poudre jacket with strong, curved shoulders was made more feminine with the addition of a satin back, while a black scuba jacket with a nipped-in waist featured silver cuff link-style fastens and held its sturdy shape thanks to a blend of two fabrics. Some outerwear pieces were adorned with delicate, swirling seams on their front.

Prints were particularly prominent. A pair of trousers was adorned with a flocked print that was actually done by hand and digitalized onto the garment, blending visual references such as the chipped painting on the doors of a Le Corbusier house in Cap Martin, textured backgrounds in Francis Bacon paintings and the work of Gerard Richter.

“This is a bit more real. I wanted this pre-collection to work for everyone,” said the designer, who is working on his second main line collection for Mugler to be presented in February. “Mugler should be a place where people find clothes that they want to live in, but also where they can have fun and experiment.”

Stretch taffetas pants and tops, in either gold or gunmetal, were clever alternatives to dresses for eveningwear, while a daring Lycra dress in fluorescent yellow was one of the wildest pieces of the collection — and a last-minute addition, according to the designer, who calls it his “silliest moment.”

After a year at Mugler, Cadwallader is open to taking more risks. “I haven’t done a dazzling crystallized gown yet but I’m warming up to it,” he confided. “It’s going to come. I’m looking forward to it.”