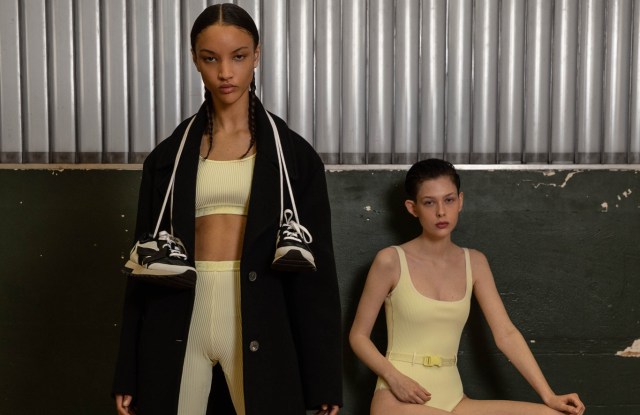 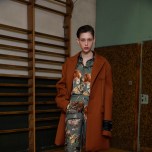 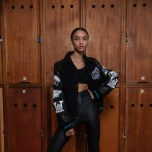 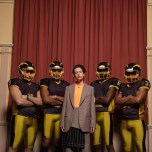 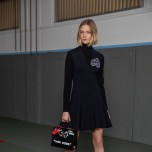 Virgil Abloh went to high school in his hometown of Rockford, Ill., but it might as well be Anytown, USA, as far as worldwide audiences are concerned.

Since the area’s schools were immortalized by director John Hughes in the Eighties (“The Breakfast Club” was shot in the nearby Des Plaines, Ill.) they have become a generic stand-in for American high school, creating a template for popular films and shows from “Mean Girls” to “Freaks and Geeks.”

“School is such an awesome naïve place, high school especially. There’s the nerd, there’s the jocks, there’s the rich kids and there’s the cool kids. There’s the Friday football game, a melting point where everyone convenes,” Abloh said of his pre-fall collection, an exploration of these various archetypes.

Think a buttoned-up white shirtdress with a pleated side panel on the (sexy) geek spectrum, or a flippy cheerleader dress worn with pom-pom-inspired fringed boots.

She might borrow her football player boyfriend’s varsity jacket, or practice world domination in an oversize checked pantsuit — perhaps asking the lunch lady, in the immortal words of Mira Sorvino in “Romy and Michele’s High School Reunion”: “Do you have some sort of businesswoman’s special?”

Abloh said he navigated between tribes as a teenager. “I wasn’t tied to anything, but I could freely travel between all,” he said. “I was a skater, I played soccer, I played basketball but also was into art, into hip-hop, all that jam.”

Clearly, he also had an inkling he was going places. “I was just making stuff and I always felt the need to keep it, because I felt like it was going to be important later, so I have mounds of all different things,” said Abloh, who has been rooting through his archives for an upcoming exhibition at Chicago’s Museum of Contemporary Art.

Some of his youthful graffiti designs have wound their way onto the label’s latest handbag pillar, the Jitney, a ladylike style featuring a rotating metallic lock in the shape of the brand’s signature arrow cross that took 18 months to develop.

“This is the future of Off-White, if I was to say, in one piece. Obviously, the handbag is to me the center of a brand: How can you take a brand’s ethics and put it in an object?” he said. “It’s chic, but it’s also young, like Off-White at the same time. It’s the mother, it’s the daughter. It can also go the other way around.”