On the eve of Art Basel Miami Beach, Kim Jones presented his second destination pre-fall collection, collaborating with one of the originators of cool, Shawn Stussy himself, and unveiling his Air Jordan project, Air Dior. The result? A retro groovy surfer with a taste for couture.

IsSixWeeksAfterFashionWeek = false
By Alex Badia and Leigh Nordstrom on December 3, 2019 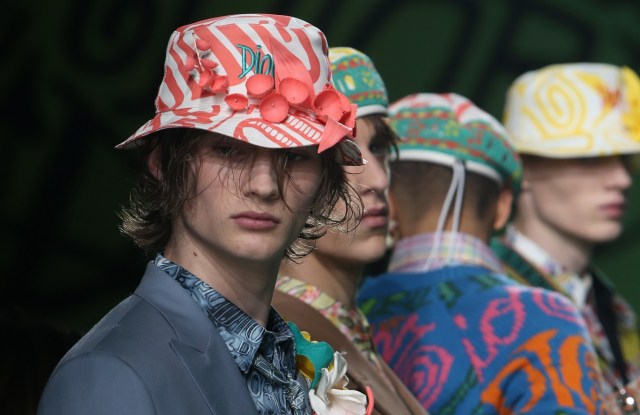 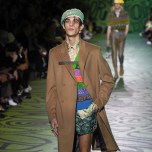 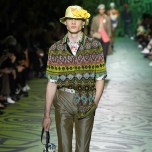 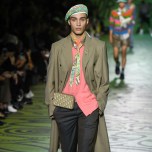 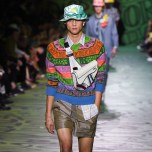 Kim Jones unveiled his second destination show on Tuesday with an homage to Miami’s heritage and a dreamy surf culture reimagined through the Dior lens. A designer who has been known from Day One to collaborate with artists, from Kaws to Daniel Arsham and Raymond Pettibon, Jones presented the 2020 pre-fall collection on the eve of one of the world’s largest art and design fairs, across the street from the brand new Rubell Museum, the night before it opened to the public. In the tradition of Mr. Dior, for whom art discovery was essential, Jones redefined the idea of an artist partner by inviting Shawn Stussy as the lead collaborator for the collection.

“He is an artist. It’s using someone who is unexpected,” Jones said. “This isn’t done with commercial intentions — this is purely self-satisfying, in a way. This is me paying tribute to someone who got me thinking about becoming a designer.”

With one of the largest front-row showings in recent memory, Jones drew VIP guests from Kim Kardashian and David Beckham to Gwendoline Christie, Kate Moss and Orville Peck. The audience sat inside of a curved ceiling, mimicking a wave about to break, which reinforced the surf messaging Jones played with through the clothes. The Dior logo, reimagined by Stussy, was printed across the walls and ceiling, submerging everyone in the Sixties groovy feel.

The show opened with a clear example of the Jones-Stussy collaboration: A psychedelic printed cashmere sweater was layered over both a modern sheer shirt and a classic shirt, paired with baggy boardshorts and a French-style beret. But the groovy messaging was grounded by the introduction of Air Dior, Jones’ collaboration with Air Jordan: a pair of high-tops with the iconic swoosh done in the classic Dior logo. A sure hot seller to the luxury streetwear customer.

Other psychedelic influences included a multicolored hand-beaded shirt jacket with a tribal feel, a floral silky pajama set and a pair of shorts done in pleated silk, meant to emulate the corduroys worn by surfers in the Seventies.

“Everything Shawn gave us, we upscaled it to the Dior couture aspect of things,” Jones said. “Because I’m really looking at him as an artist.”

“I felt like part of the team — from a distance,” said Stussy, who created artwork in black ink on white paper. “They in turn blew it up, colored it, stretched it, marbelized it, beaded it and for me the interesting part was that they wanted me to do my feeling of art, and then they took it to the couture level of production and techniques. And that was one of the reasons why I signed on immediately.”

More traditional men’s wear moments included a butter-soft, pencil-thin cashmere topcoat and a new take on the double-breasted oblique suit — one of the brand’s bestsellers. Contrasting with the good-boy aesthetic was the use of python print, done in leather short-shorts and shirts and in leather car coats, all with a metallic sheen that nodded to the fun excess of Miami.

In a relatively short time at Dior, Jones has successfully developed a whole new men’s wear vocabulary for the younger generation that challenges the boundaries of masculine dressing, done through couture techniques. But with this collection, he is also bringing back one of the originators of cool, an effort that resonates with today’s ultra-knowledgeable consumer who favors both timelessness and trend.