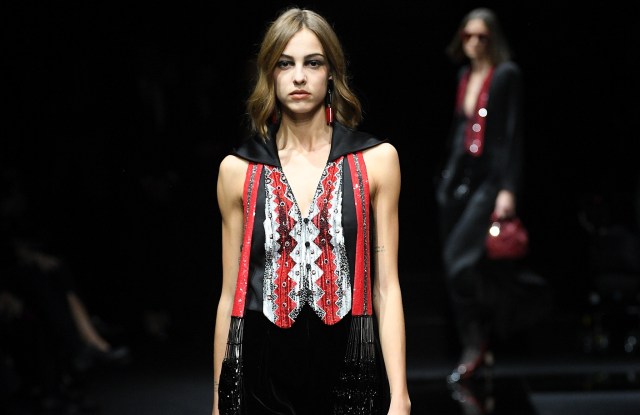 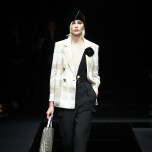 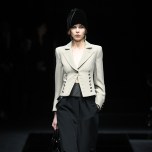 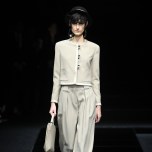 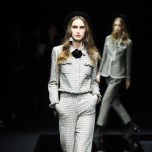 For his first pre-fall runway show, held in Milan at the Armani Theater on Thursday evening, Giorgio Armani unveiled a collection that he named “Transformism.” The designer explained this moniker during a press conference beforehand, saying: “I wanted to allow women to be free and different whenever and wherever they wish, changing depending on their mood.”

His lineup, in fact, touched notes while remaining rooted in the sense of rigor and practicality that are distinctive traits of the brand. Armani’s personal idea of femininity continued to be influenced by sartorial references, which translated into a plethora of suits on the catwalk, some featuring constructed jackets with small proportions, others more loose and fluid, such as languid velvet designs punctuated by tiny details echoing the Eastern iconography. “There is an Oriental touch that does not have a precise origin — someone will say that Armani always has that, but the Orient is an inexhaustible source of inspiration. It offers dreamy references, maybe less realistic but more linked to a mood,” Armani explained.

Pleated pants or trousers with bustier-like details were matched with laid-back cardigans, body-hugging coats and cozy padded outerwear styles, which, along with cargo pants, joggers and drawstring details, introduced a touch of urban dynamism.

Playing with a restrained color palette, mainly worked on tones of champagne, red and black, for pre-fall Armani indulged in the use of prints, spanning from feminine flowers to allover graphic motifs splashed on suits worked in lightweight, shiny fabrications.

Silhouettes and proportions, along with the models’ short haircuts and the revisited turban hats, echoed a Thirties’ femininity à la garçonne. Louise Brooks would have cut a wonderful figure in Armani’s exquisite evening dresses, which, with their intricate decorations, sparkling fringes and the — always discreet — transparencies expressed the designer’s take on seduction which, as the show notes read, is “simple yet effective, rigorous yet sensual.” A seduction that can be endorsed by real women who, following Armani’s tips, have the power to reveal the many sides of their personality and aesthetic. “In the evening, a woman can be more fun and free to choose,” he said. Women, it’s your turn!