Creative director Nicola Glass plays with the ephemera of summer for her latest outing. 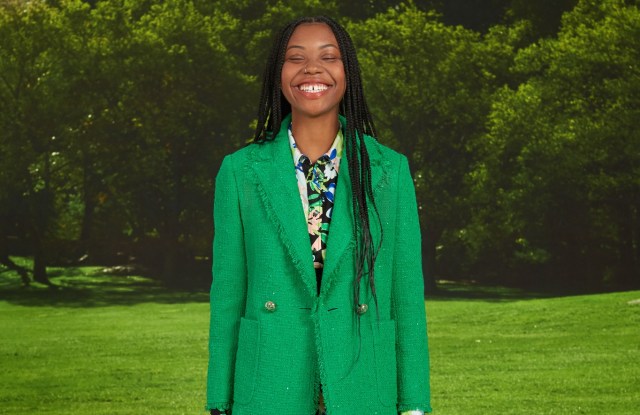 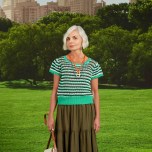 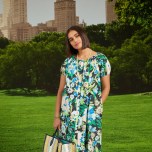 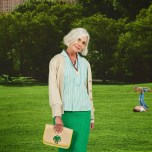 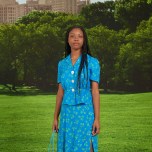 “With each season it’s not like you’re changing completely,” Glass explained. “What you are doing is building on it.”

Last season’s garden party has morphed into city picnic, with the Glass zeroing in on the ephemera of summer.

“It’s pieces you’ve collected and worn all summer,” she said.

There was a slight nod to the Forties in her all dress and skirt offering. Several garments created an hourglass shape. She used florals that had a hand-drawn feeling, like on a button-up smock like dress that hung loosely on the body, but the strongest prints were the tongue in cheek graphic fruit prints.

She topped off her looks with little knit cardigans or light tweed jackets, and as she usually does, each look was styled with a bag. There was a play with texture, with a crochet color-blocked bag; or new ideas of shapes, with molded fruit shapes on adorable cross-body bags. Other bag shapes include a new market toes in clear transparent colors, and an updated version last season’s doctor bag.

Wicker bags — an obvious choice for summer and a literal interpretation of her picnic theme — were inspired by pieces Glass found in the brand’s archive.

A mix of flat summer sandals and raffia flatforms and fun fruit slice jewelry were the final layer. Playfulness mixed with pragmatism, something the brand is known for and now several season’s in, a prospect Glass continues to deliver on.

Once again Glass chose to show the collection on a diverse cast of models and influencers with a wide age range.

“We had such a good response,” she said. “Not just from the press but really from our customer.”