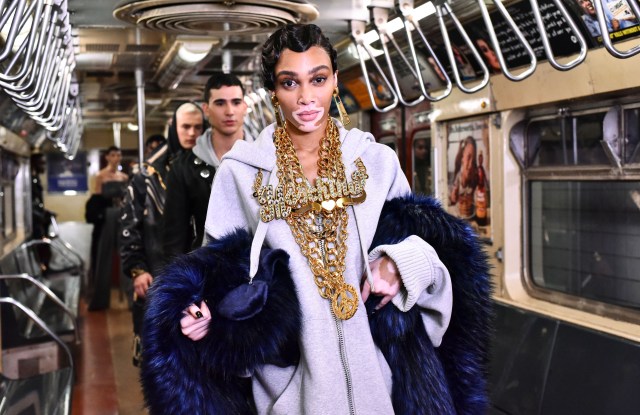 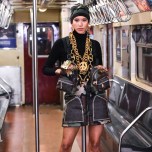 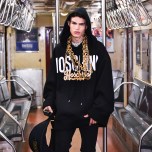 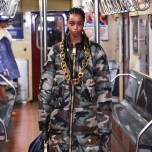 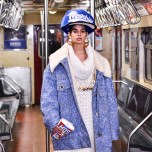 Given the details leading up to Jeremy Scott’s Moschino pre-fall show (a larger-than-life Metro-card invite; he would show at the New York Transit Museum in Brooklyn, N.Y.) one could guess his inspiration would stem from New York City. Still, it’s impossible to imagine in advance how Scott would deliver the fantastical mastery of maximalism and riffs on personality tropes into a given theme. Inspired by New York City, which he considers a second home (he went to Pratt) and where he presented his collaboration with H&M last fall, he served up an uptown-meets-downtown funfest, focused on the wild ride that is the city’s most essential mode of transportation, the subway.

As models stomped onto the museum’s platform and through two rows of subway cars, a mélange of city subcultures and stylized personalities emerged. Downtown cool kids wore reworked tracksuit gowns, boom-box- and camouflage-printed garb and head-to-toe leather, while the working woman flaunted a large Moschino label on the back of her trenchcoat.

To capture the melting pot that is NYC, looks were styled with versatility — the baby pink, logo scarf print was offered up on cool puffers or worn as a headscarf by a “chi-chi,” tweed-clad Upper East Side woman. Scott deems attitude as the one quality that makes a real New Yorker, and he delivered plenty via macro (and a few micro) details. Hip-hop-influenced megawatt gold nameplate necklaces and chains topped giant knits, sartorial sweatsuits and sporty puffer coats with maxi bags from fanny packs and totes to a retro boom box. Even the “cute little boy on his way to school” (actually an adult model) worked a fashion look — oversize cap and overly oversize backpack — as he trekked through the cars.

Almost everything was decked out with Moschino signage in a way that made logomania feel fun again. Scott nailed the New York subway vibe, featuring characters he’s seen along the ride, his humorous twists adding panache and flair.