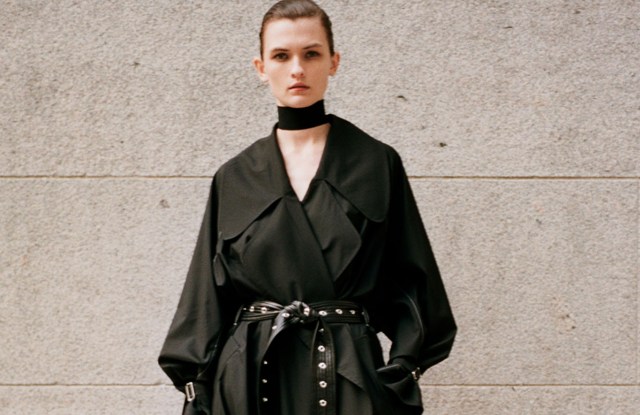 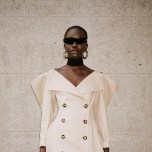 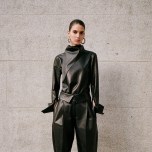 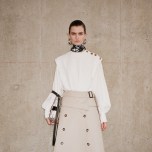 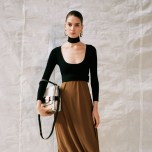 “These pre-collections are about wardrobe-building,” Hernandez said. From some brands, that could be code for boring. Not here. “Still with a fashion punch,” McCollough interjected.

Fashion punch indeed. On Tuesday, the designers showed a tight lineup of smart, interesting clothes in a series of small showroom presentations. Building on the Eighties vibe that wafted through their spring collection (they’ve also sworn off the major sartorial mood swing) they worked savvy oppositions of volume and body-con, structure and fluidity, long and short.

A number of boldly proportioned round-shouldered coats were cinched with grommeted belts for swagger; a “trenchy” dress was cut lean before fanning into a short A-line skirt. This and other knee-baring looks were shown with charming pointy-toed witch shoes with two skinny ties and an almost imperceptible heel. While fashion decreed long ago that length is a nonissue, Hernandez and McCollough beg to differ. They’ve favored longer silhouettes for some time, and correctly felt that the insertion of a shorter lengths added unexpected depth to the lineup.

More often, they went long with ease while retaining an aura of modernist power dressing. Case in point: A side-draped brown skirt with a scoop-neck black top and white boots, and a khaki number that gave the goddess-gown trope a soupçon of superhero. And they continued with tie-dye, which has become a house code after its introduction several seasons ago. Here, they worked it masterfully on velvet in fiery orange and red hues for a skirt and dress.

The craft muscle sufficiently flexed, Hernandez and McCollough closed with a stunner: a stark black strapless dress, its full-length side zippers bordered in big, graphic crystals and unzipped over trousers, bunched at the ankles. Perfect for when that urban adult has an urban big night out.