For his third Moschino show in his hometown of Los Angeles, Scott went to the circus — literally — creating a tent of colorful thrills and frills in the middle of a grassy equestrian compound in Burbank, Calif. 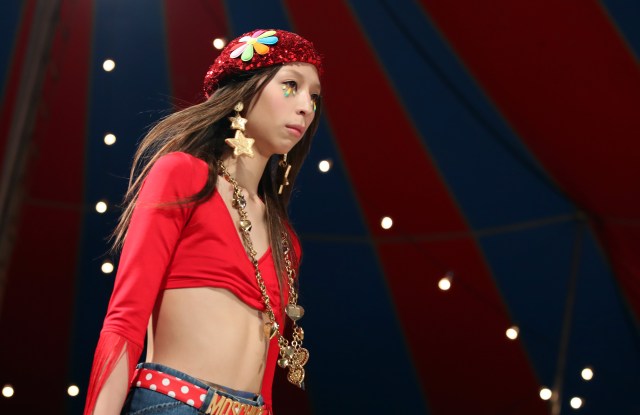 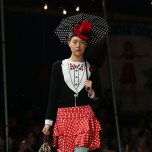 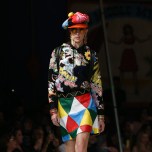 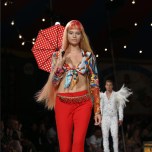 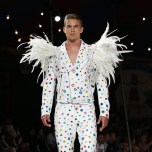 “Ladies and gentlemen of all ages, welcome to the Moschino circus!” boomed Jeremy Scott, who did his best P.T. Barnum as he strode into the ring of a giant blue-and-red-striped circus tent on Friday night.

Decked out in a black and gold skeleton suit and top hat, the designer literally took center stage before his combined resort 2019 and spring 2019 men’s runway show at the Los Angeles Equestrian Center, and he relished every moment of it.

“We have thrills and chills and plenty of frills tonight! You will witness death-defying acts of glamour! You will see beading and embroidery never before attempted in a setting like this! A kaleidoscope of colors will tantalize your eyes….So, without any further ado, let the show begin,” and with that, the crowd went wild before the first look had even hit the circular runway.

It was the third year in a row that the Moschino creative director elected to show these seasons in his hometown in June, and it was easy to see why. As guests pulled up to the gated grassy compound in Burbank (the horses were safely tucked into their stables for the night), they were greeted by a mini Ferris wheel, painted carts, performers dressed in lion and bear suits and clowns on 6-foot stilts and unicycles, and that was before they even got inside the massive tent, which comfortably sat 450 people.

“I think we need fun always,” said Scott backstage, as a cool breeze blew through the open flaps. “That’s kind of my role in fashion, bringing the fun, and I thought how much more fun can you have than with the circus? You have every kind of look you really want so….I mean, ultimately a circus is rock star,” he said, gesturing at Stefani, who was standing nearby admiring some of the clothes. “That’s what a circus is, so I have all the different elements, like our suiting and moments where you can be the clown and mix it around, or it can be very sparkly stage costumes or party dresses. It can kind of accommodate everything.”

Indeed, Scott sent nearly every one of his favorite runway looks into the ring, from animal-printed suits and minidresses, this time embellished with sequins, to flower-power bell-bottoms to classic tuxedo suiting (accessorized with mini top hats and canes). He also added some literal circus costumes: the strong man leotard (in leopard print, natch), the oversize clown pants with ultrahigh suspenders, colorful hoop skirts, color-blocked capes and spangly trapeze artist suits. But some of these were also tweaked in clever ways: one red pair of “clown pants” was tailored into a formfitting jumpsuit with the wide black belt forming a graceful off-the-shoulder neckline.

A metallic harlequin print made for some chic and slinky disco dresses and a slim suit, and a pink chiffon bias-cut gown was embellished with embroidered can-can-themed appliqués. One recalled some of Scott’s early collection for his eponymous line, that he showed in Paris and Los Angeles in the early Aughts, such as the foam Venus on the Half-Shell swimsuits. The newer version here was a sculpted ruffled mesh party dress and a teal leotard dotted with life-sized artificial doves. Like every Moschino show, the over-the-top, tongue-in-cheek spectacle made perfect sense in the carefully created setting. And somehow, the designs also translate into salable separates and accessories (think popcorn carton purses and giant ties).

Scott continued, “That’s what I love about having a show in L.A., because it’s just so light and fun and you feel the love. It’s not like Milan or Paris or New York where people are like, OK, jaded. These are my friends who are coming to my show. This isn’t some judgmental situation. I was attempting to do the circus originally in Milan, but then, why wouldn’t you do it at home where I can really have grass and a tent and a little Ferris wheel and all my heart’s desires?”

Scott said he loved the circus as a kid. “From the clowns to the trapeze, everything was excitement. I’m both the ringmaster and the clown.” While he admitted, “My dream had been to be shot out of the canon at the end of the show, but it takes eight months of training and I didn’t have that luxury,” he seemed pleased enough with the final result. As he posed for circus-themed photos backstage with his extended family and Stefani and her brood (plus a few of their tiny friends), he said, “I love the grassy knoll. I wanted to have the show in a field and have it feel real, with an open-air backstage.”

Soon he was interrupted by Kris Jenner, who swooped in for a hug. “How are you? Oh my God, thank you for inviting us. This is beyond,” she said. And with that, Scott disappeared into the crowd.

Stefani, meanwhile, was enjoying her time backstage. “The only reason I never get to come to these shows is because I have them,” she said, referring to her three sons. “It’s hard to get out because you feel really guilty like, ‘I’m gonna go hang out with friends and watch a fashion show…’ It’s impossible. So tonight was the night.”

She said she didn’t learn of the show until a few days ago, explaining, “I called Jeremy because I’m doing a Vegas residency that starts in three weeks — and finally after all these years, he’s been so unbelievably generous to me and sweet and a friend; we’re in the same lane as far as fun and pop culture and I just love what he does and he’s an artist — so anyway, I called him to do the finale costume. Right now I just have a sketch. So that happened. And I didn’t know about this until a couple of days ago. I was like, ‘Oh no, I’m in rehearsals, but it has to happen.’ And my son had a circus birthday party last week so I was like, ‘That’s it. I have the kids so I’m bringing them with me.’”

Not surprisingly, she said, “Everything caught my eye. There’s was a pink kind of Fifties lace, then I saw the marching band stuff, and then this girl with the doves. I just love how theatrical he gets. He just doesn’t care, he takes it all the way and he takes a lot of references from the Fifties and things that are my same constant inspirations.”

Stefani said her 12-year-old son is also showing early signs of her same love for fashion. “He suddenly realizes that name brands are supercool and he has good taste, and he goes, ‘Mom, can I borrow your Moschino?’ and I’m like, ‘Dude? OK.’ And I took a picture of him in it and sent it to Jeremy and I was like, ‘Look, he’s got the fever.’ I don’t know how to handle it, but I guess I understand why he loves it. He does have a good eye.”