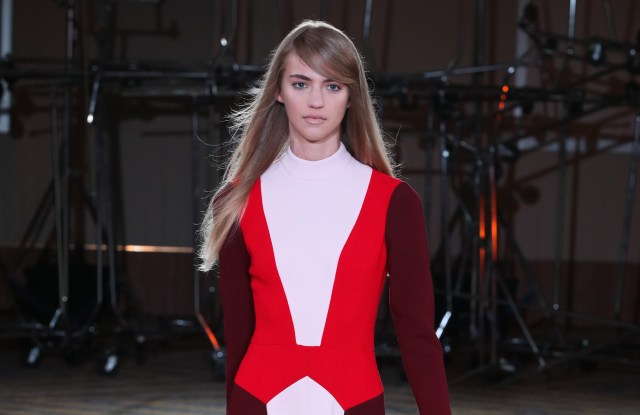 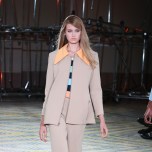 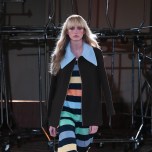 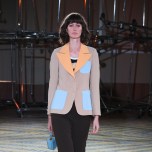 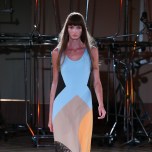 For resort 2019, or what Brian Wolk and Claude Morais dub “Collection 7,” the Brooklyn transplants continued their love affair with Los Angeles and its art and music culture.

As always, the design and life partners looked to California-bred art movements for inspiration — this time the “California Cool” movement that spawned female abstract expressionist and modernist painters such as Tamara de Lempicka and Helen Lundberg, and Lorser Feitelson whose geometric works formed the basis of the pieced, color-blocked crepe gowns and jacquard suits.

“The Cool movement was a large group of artists and musicians answering to the formality of the East Coast,” explained Wolk. “At the same time, there was still strictness. They still worked a lot in geometry, but there was this kind of certain relaxed feeling about it.”

“You see it in Lundberg’s artwork in particular, how she came here making everything so relaxed and not so affected, like East Coast sometimes is,” said Morais, while gesturing to a gown with forest green, pink and burgundy pieces that were cut to give a full 360-view of the pattern. “We imagined the fabric as if we were painting it like a painting.” All the gowns’ columnar shapes just skimmed the body, and looked just right with the flat, white pointed-slippers all the models wore. The duo work best when playing with color and pattern on simple silhouettes; past collections exploring more frou-fy party dresses were less effective.

Another category they continue to refine is suiting for men and women. They aren’t unisex, per se, with each gender tailored to body type, but “the gender-bending stuff we’re interested in every season,” said Wolk. Their women’s pant was waistband-less, pocketless and had a slim fit over the hips, and, like the men’s pants, were cropped for a Sixties-inspired Beatles look. The metallic jacquards used for the suiting were inspired by the California craft movement, such as Mexican pottery and tile.

Collection 7 marked the first time they experimented with knits, a colorful rugby stripe used for jumpsuits and turtlenecks that lent an informal fluidity to the well-edited collection.

The site-specific show — held at the modern Jeremy Hotel in West Hollywood, next door to the Wolk Morais permanent shop-in-shop at Fred Segal — echoed the clothes with the teak paneled walls and dark green velvet furniture.