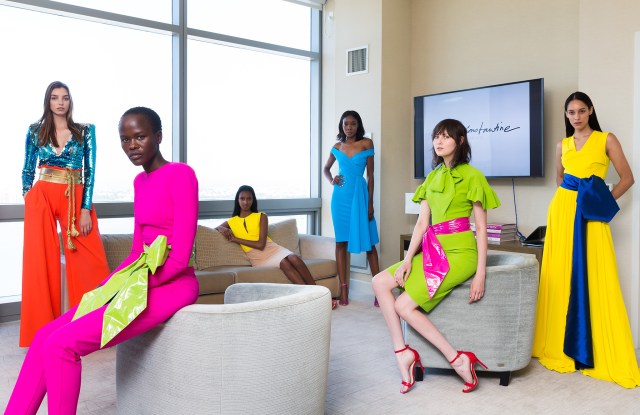 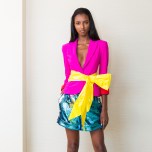 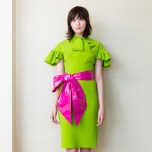 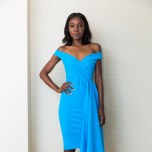 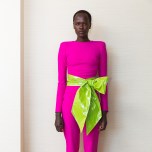 Over the past two New York Fashion Week seasons, Canadian designers Stephen Wong and Kirk Pickersgill of Greta Constantine have become known for their over-the-top, superfun, sequined looks; for resort, the duo took a commercial pivot, featuring a selection of highly saturated, monochromatic separates. “It kind of all started with the Meghan Markle skirt, because when we did the skirt for her… (before) we only did dresses and gowns and then once we did the skirt we were like, ‘well why aren’t we doing more separates?’ So it started from there,” explained Wong. Markle was photographed in one of Wong and Pickersgill’s custom fluted microfiber skirt on a trip to Ireland in March.

“It’s like wearing Spanx, it holds you in and keeps you smooth,” Wong spoke of the microfiber fabric that featured prominently in their collection, including on a pink, fitted blazer that was paired with blue sequined shorts. Outside of the vast selection of fit-and-flare monochromatic frocks was a smaller selection of lightweight “parachute” silk dresses, a noted new fabric for the duo. Newness also came in a selection of denim that Wong and Pickersgill warily claimed to be “testing the waters with.” The takeaway from both the designers and the collection was a lack of confidence, a characteristic that beamed through their fall sequined looks. Overall, the abundance of saturated color was welcomed, however the collection lacked its previous trendy twinkle.